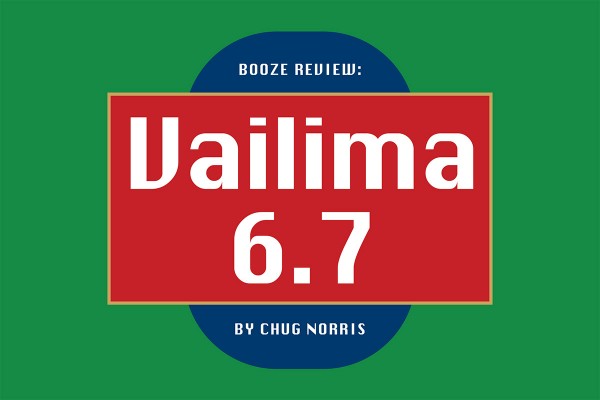 Feeling drained, literally, by my Fizzliss experience last week, I decided to fortify my strength by returning to my origins: Beer. I went into Henry’s and picked up something called “Vailima.” The name alone intrigued me. Just in time for Samoan language week, I learned that Vailima is Samoan for “water in the hands”.

The bottle, like myself when I am intoxicated, tells a story. Apparently Vailima references a Samoan story about a couple crossing an island to find a revitalising stream. In many ways this perfectly sums up my experience with the drink. It was as if I had become lost in a barren land of endless RTDs and forgotten where I was from. Vailima reminded me who I was and humbled me.

I consumed Vailima without expecting anything special. It was a Saturday night and I had been banging my head against a wall with study all week. There was some vague mention of going to some ski party, but I was feeling pretty out of it and was just stoked to be having a drink. I cracked open the bottle and began to take my first sip. The mouth feeling was underwhelming, but satisfying. Vailima didn’t amaze me, but I could tell it was going to serve its purpose. It was going to make me drunk.

The taste could not be described as sensational. In fact, it’s rather boring. It’s like a watered down Corona, or a flat Speights. I would equate it to a mediocre one night stand. Satisfying, but not exciting. It’s like ready salted chips, butter on toast, or having a tolerable lecturer. Simple and effective, Vailima gets the job done. However, Vailima is rich enough to conceal the 6.7% alcohol until you are buzzed enough not to notice it. The fizziness is pretty minimal which makes it go down pretty easily, and it doesn’t leave any nasty after tastes. It’s so easy to get down in fact, it only took a few bottles for me to realise I was truly fucked.

The strength of a couple of these bad boys inspired me so much that I insisted on heading out. Although I didn’t take any drinks out, I found myself on a fantastic level for several hours. By the end of the night it was freezing cold, but the memory of Vailimas kept me warm inside for the stroll home.

These puppies come in 750 mL bottles and at 6.7% they clock in at four standards a bottle. I’m pretty sure Henry’s is the only place that sells them, and for $6 a bottle. This puts them at $1.5 per standard. So it’s pretty affordable, and they’re definitely worth the trip, especially for the novelty of a beer that’s not brewed in Auckland. There’s nothing like drinking straight out of a 750 mL bottle. It takes you right back to crate day and summertime.

Look, maybe it’s not the best beer that I’ve ever tasted. Sure, it’s mediocre and predictable, but Vailima reminded me of where I belonged: being too many standards deep and talking shit to strangers on a Saturday night felt just like home.

Pairs well with: Nandos, a return to glory, rapid intoxication

Froth level: The second bottle from your crate on crate day, summertime and the livin’ is easy

Taste rating: 6.9/10, not exceptional, not terrible