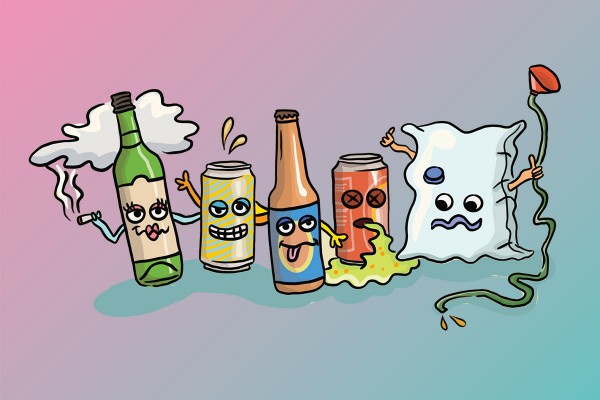 Having already acquired my alcohol for Hyde and not ready to buy anything else for the week, I decided to scrounge the little alcohol I had and try out a few wacky combinations. Mostly they were better than the original ingredients.

The Triple Brown consists of a Double Brown with a splash (or several) of whisky. I used an almost empty bottle of Bell’s Scotch whisky which I found at the back of the fridge. The introduction of the whisky adds a sweet overtone which really adds a whole new dimension to the rich, carby base of the DoBro. Overall, the Triple Brown is a refinement of an already fantastic drink, I highly recommend. Also, the extra kick of the whisky inebriates quite rapidly.

Froth level: A raging wood fire on a winter evening

Pairs well with: Probably a cigar and a three piece suit

Faced with more cash-flow problems, and determined not to let my heavy investment in Rodenbachs go to waste, I created the ultimate study beverage: The Rodenbull. It is perfectly suited to that period where you have committed to a night out but want to squeeze in a little study before you fully get into it. A 1:1 ratio of Red Bull and Rodenbach ensures a heavy emphasis on the Red Bull flavours and, more importantly, caffeine.

The usually unbearable sourness of the Rodenbach evaporates in the presence of the tangy Red Bull. The result is an extremely refreshing combination of cheap alcohol and caffeine. Additionally, I imagine that the Red Bull could easily be swapped out with any energy drink on the market. The success of this drink is not a reason to buy Rodenbach. But, if you happen to have a few lying around, you could do a lot worse.

Froth level: Realising your assignment is due a week later than you thought

A shot of whisky chased by a shot of pickle juice. The vinegar in the pickle juice kills the burn from the whiskey (or any spirit, really) and makes for alarmingly easy shooting. It’s not exactly delicious, but it’s smooth as hell. But there’s danger involved: if you don’t swallow the whiskey and chase it fast enough, you just get an extra-awful shot that’s the worst part of both drinks. Great for those who like risks, or pickles. Often that’s the same type of person. Also, pickle juice is great for fighting hangovers.

Tastes like: All the good parts of whiskey, all the bad parts of pickle juice

Froth level: Wondering how similar a pickle is to Yoda’s peen

Pairs well with: Tractors and violence

Taste rating: 7/10. Better than it should be, worse than it could be