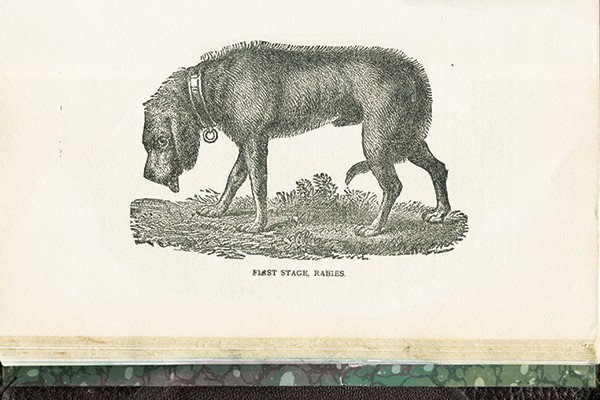 This is a disease resulting from the bite of a rabid dog, or from its licking an abraded portion of the skin, the chief characteristics of which are severe constriction about the throat; spasmodic action of the diaphragm; a peculiar difficulty of swallowing and consequent dread of fluids; anxiety and restlessness; followed by exhaustion, delirium, and death.

Symptoms in Man
These are not manifested till a period varying from a few weeks to one or two years after receiving the infection, the wound having probably healed, and the scar presenting no remarkable appearance. Twitching and itching sensations are sometimes felt in the vicinity of the wound prior to an attack. Sometimes there is stiffness, or numbness, or partial palsy, or the wound may be red and swollen, there is an indistinct feeling of uneasiness and anxiety, with giddiness, chills, heat and a general feeling of being unwell.

Special symptoms are arranged under three heads. 1. A spasmodic affection of the muscles in the throat and chest, act of swallowing commonly exciting convulsions, makes the patient afraid to repeat the attempt, hence the horror of all the liquids which is so remarkable a feature of the disease. 2. An extreme degree of sensibility of the surface of the body. 3. Mental agitation and terror frequently mark the disease throughout.

To these symptoms we may add extreme thirst, the secretion of a remarkably viscid saliva, the effort to swallow which brings on the convulsive fits, the convulsions increased in frequency and violence, the lips and cheeks become livid and perpetually quiver, till, at length, one fit lasts long enough to exhaust the remaining strength.

Remedies
At the time of the paroxysm, divest the patient of all clothing and bandage the eyes. Put him into a bathtub in the following manner: place a thermometer in your bathtub, and when you have prepared the water at a temperature of sixty-five degrees Fahrenheit, plunge him into it without regard to his remonstrances. Repeat the bath whenever the paroxysm returns. It is important that the patient should neither see nor hear the water, nor know of the proposed bath, for this disease is aggravated by either. Give the patient chloroform to relieve the spasms. One of the secrets of the success of this treatment is the suddenness and unexpectedness to the patient of the application.

German remedy
An aged German forest keeper, not wishing to carry it to the grave, gives us a valuable remedy he has used for fifty years, and which, he says, has saved several men and a large number of animals from a horrible death by hydrophobia: Bathe the bite as soon as possible with warm vinegar and water, and, when this has dried, a few drops of muriatic acid poured upon the wound will destroy the poison of the saliva and relieve the patient from all present or future danger.

Soak a rennet in a little more than a half-tumbler for about ten minutes. When this is done, add pulverised savidilla and mix it thoroughly. Give it to the patient (that is, force it down his throat in the interval between the paroxysms). The patient is then to be put in the sun, if possible, or placed near the fire, and well warmed. If the first dose tranquilises him after a short interval, no more is to be given, but if he continues furious, another dose must be administered, which will infallibly quiet him. A profound sleep will succeed, which will last twenty-four hours or forty-eight hours (according to the strength of the patient’s constitution), at the expiration of which time he will be attacked with severe purging and vomiting, which will continue until the poison is entirely ejected. He will then be restored to his senses, will ask for food, and the cure is effected.