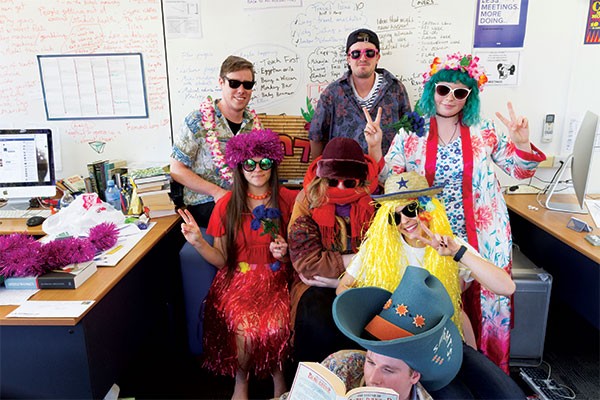 Q: If you could pack your bags for anywhere tomorrow, where would you go?

Hugh: With Ceri being a native of Waimate and always raving about the place I suppose I’d probably head there to check it out. Apparently there’s a slab of concrete on a hill painted white called the “white horse of Waimate.” Tourist attractions like that would pull me in. (“It’s an icon,” says Ceri).

Tash:  My brother has moved to a small Japanese island in the tropics with amazing marine life and coral reefs. Plus he drinks nice scotch. Okinawa is first on my list.

Ceri: I would go to the Svalbard Seed Vault and eat all their sunflower seeds as a display of dominance.

Lucy: The same place I pack my bags to go every day – the Critic office. All of my friends and interests are there, we can make instant coffee for free, and Hugh buys me stationery. Paradise!

Laura: After going to Hawaii last year, I can’t wait to go back. My husband often sends me photos from our trip saying “remember this? Let’s go again tomorrow. Let’s be homeless in Hawaii”. Although I really want to visit my friend in England as well!

Joe:  I’ve been struggling with this question for a while now. I have two destinations in which I have longed to travel to since I can remember. The first is Buckingham Palace, as I would love to catch a glimpse of the Queen. The old girl is coming up 90 and I feel that time is of the essence, who knows how long until she kicks the bucket. The second is the Vatican as I have prayed to the heavens above for a while now that God while bless me with His Holiness the Pope’s presence. To kiss his ring (don’t even care about germz) and bask in his holiness is simply all I ask. Travelling may be a little hard at the current moment as I’M NOW A VEGAN (tell your friends).

Henry: This week we’re talking about our ideal getaway destinations. Luckily this has been on my mind recently. As a journalist you are constantly waiting on other people’s responses, if not struggling for their cooperation in the first place. As a result journalists often become the more jaded and cynical members of society. On the other hand our politicians seem eternally happy (notwithstanding the New Zealand Labour Party), so for after considering my possible getaway destinations I’ve landed on the sunny shores of the New Zealand House of Representatives. So long happy readers.

Peter: I would like to go to Necker Island because it would be warm, peaceful and would also give me a chance to pitch some of my business ideas to Richard Branson.