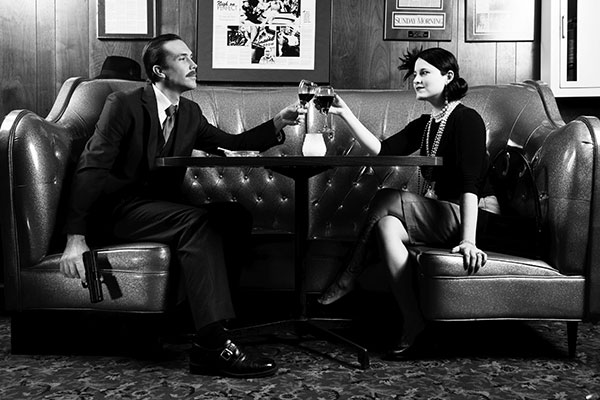 Critic’s blind date column has been running for a while now. We’ve all got some good laughs out of it, and at least a few people have scored themselves a night of romance. But here at Critic we feel that it’s time that we stepped it up a notch. The date is now at Metro to add a little more spice. If you want in on the action, email
critic@critic.co.nz with your details.

So there I was, anxiously getting ready for my date while having a few quiet Corona and lemons to calm my nerves and wishing 7pm would hurry up and get here. Soon enough I was on my way, making the long arduous trek (in the cold, no less) from my flat all the way (20 mins mind you!) to Metro, wondering how the night would go and whether I’d be stuck with, to put it bluntly, a mental. Or if I’d be one of the lucky ones who lands an awesome date only made better by the inclusion of pizza. Turns out my night was in the latter category, as we both sat down and immediately began chatting, starting of course with the standard what do you do at uni, where do you come from etc, but quickly delving into more personal questions like “What is the most embarrassing thing you’ve done while drunk?” Needless to say, I will not be repeating the conversation here to save both myself and my date a great deal of embarrassment.

From here the night progressed well, with the conversation flowing as freely as the booze we were so attentively plied with. The pizza went down a treat (chicken brie and cranberry for those wondering), and was great for soaking up the excess booze until the bar tab ran out, which in my opinion happened far too quickly. With the tab now gone and the far-too-convenient arrival of all her flatmates we decided to go for a walk, and I’m sure made the lady who works behind the counter at Regent Theatre’s night with our drunken antics and inability to pick a movie. From there, I walked her home and even offered my coat to keep her warm on the walk home like a true gentleman! So we come to the end of the night and I must have done something right, because as I walked home in the rain my phone was one number heavier and the a second date seemed very likely indeed. So thanks Critic for an awesome night out with great food and great company, and I urge anyone out there thinking about going on the blind date to get out there, bite the bullet and do it, you never know who you’ll meet!

Everyone who knows me, even vaguely, will know that I am one classy lady. When I received the email from Critic asking if I would attend I was elated- to me the email read ‘a guaranteed pound’. I would have no standards, because let’s be honest, standards seldom get your fanny filled. My room was immaculate in preparation for a good clean pound. Something I really should strive for, I need to punch some sophistication back into my sex life. Audiences (vague memory), car park (no memory) and freshers (wish I had no memory), I always manage to outdo myself. So I arrived at Metro, somewhat inebriated, expecting a curry-muncher after the application I submitted suggested a fetish for curry. To my surprise he was Caucasian, rocking a suit and sporting a bum part with long golden locks. But that is neither here nor there, standards are for pussys. We immediately bought our first drinks to help lubricate the conversation, but more importantly, my va-jay-jay. I tried to impress him by showing him my unprecedented ability to scull back any alcoholic beverage. I then began dropping the C-bomb, and was delighted that he shared a similar diction to myself. Unfortunately my plan of not getting off my tits failed, and I was probably making the biggest dick of myself, but I can neither confirm nor deny this statement. Conversation flowed and began to resemble something like that of my favourite drinking game, “My drinking problem came to light when… (insert story here)”. To every story he provided, I had a similar story only ten times worse. Thankfully I only told the best of my most non-horrific ones. I think. I was devastated to find he flatted with my fellow classmates, an absolute deal breaker. When I realised the entire bar was filled with my snooping friends I gathered it was time to go. We tried a movie but too drunk to even comprehend the title (it was ‘No’), a movie was out of the question. As a true gentleman, he gave me his jacket and walked me home. I went next door, professed my virginity to the neighbours, watched Pocahontas and went to sleep. Waking up to a sore wrist I started to question my hand virginity, until I remembered sliding down some stairs. Thanks for the bar tab Critic, and cheers for the feed and drink Metro.