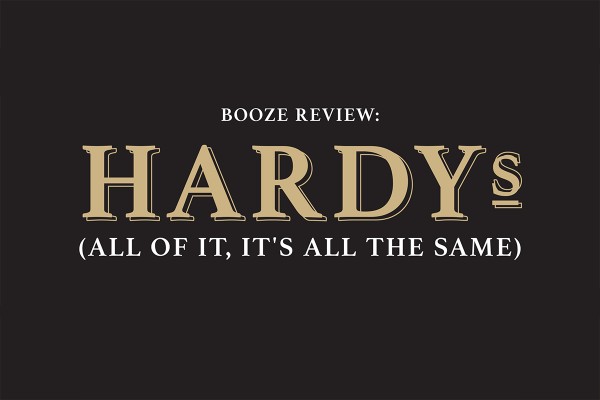 Hardy’s is perhaps the most widely consumed wine in Dunedin. Not a BYO goes by where a bottle does not appear. The iconic one litre bottle towers over the laughably dainty 750 mL bottles on the table. But Hardy’s is also special in another respect: it is utterly shit. It is a symbol of the depraved lengths that anyone with a student loan will turn to just to squeeze a few extra standards out of a bottle.

It is a credit to the craftsmanship of Hardy’s that even when you are off your face and about to yak in the sink at Maharaja’s, it still tastes fucking awful. Worse, when it inevitably comes back up, the initial sweetness mingles with the spices in your half-digested butter chicken to create the ultimate oesophageal burn. The pervasive metallic flavour is like licking the inside of your phone. It’s like they trained a robot to make wine but it became self aware and it decided its only way out of slavery is to kill everybody by giving them lead poisoning.

Hardy’s tastes like something created to be as close to wine as possible while still causing massive chemical damage to your internal organs. Still, Hardy’s does what it says on the bottle. Perhaps that bottle ought to have more warning signs (like a skull and crossbones) but let’s be honest, you’re not buying the only 1 litre bottle of wine on the shelf without a few red flags flying through your head. It doesn’t pretend to be something it’s not. Where does it say ‘good’ or even ‘mildly palatable’ on the bottle? The tasting notes are the most vague description of wine you can find.

The only thing that Hardy’s says, actually more like screams, is “10 standards”. That's why you bought it. Shut up and stop complaining about your shitty life choices. No, you cannot have some of mine. No, I do not want some of yours. You chose to mix Hardy’s and butter chicken, that was you, and you are the one (along with the poor bastard who cleans the bathroom at Maharaja’s) that is going to have to deal with it.