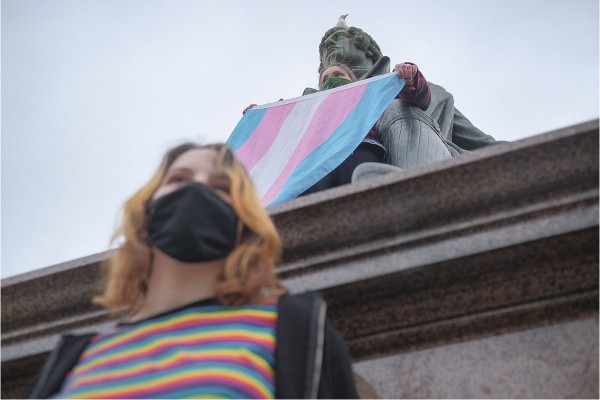 Dancing turns out to be more fun than yelling, who would have thought?

A “Suffrage Day celebration”, hosted by self-proclaimed gender-critical feminists in the Octagon last Sunday was counterprotested by a transgender-positive Jump Jam pizza party.

The counterprotest was described as “wholesome” by attendees, and no arrests were made. However, police received an assault statement from one transgender-positive protestor, and ignored a complaint from another who had been sexually assaulted.

Tracey Crampton Smith, a member of “gender-critical” groups such as Stand Up For Women, had booked the Upper Octagon to “celebrate Suffrage Day, the day adult human females won the right to vote in New Zealand and to celebrate our female sex based rights, share information and have tea and scones.” She and around nine others held a tea party, displaying signs that said “FEMALE WOMEN IS NOT A FEELING” and “FEMAME RIGHTS [sic]”.

The core issue behind the protest was the debate surrounding the Births, Deaths, Marriages and Relationships Registration Bill (BDMRR). The Bill, which passed its second reading last month, would simplify the process of changing one’s sex on their birth certificate.

Tracey believes that the proposed amendments to the Bill could lead to consequences such as medical complications, male prisoners identifying as women to access female prisons, and getting away with crimes.

Scout Barbour-Evans, who helped to organise the hīkoi, was “horrified that this group would try to co-opt such a proud part of history for their own gains, and would misconstrue the BDMRR bill's intentions so horribly. We largely support BDMRR as it will make changes that will revolutionise many of our lives,” they said.

Brandon of International Socialists Ōtepoti, another hīkoi organiser, argued that “the call by ‘gender critical feminists’ for sex-based rights rests on the assumption that gender-based oppression is due to biological difference, and therefore intractable. If you have a penis, they argue, you put anybody with a vagina at risk. This explains their advocacy for state-enforced sexual segregation, for example by forcing trans women into men’s prisons. We need to recognise that biological essentialism is a dead-end in the fight for sexual and gender liberation, just as suffragists did when they fought for greater participation in the political sphere regardless of their genitals and reproductive role.”

The transgender-positive side said that “freedom to experiment with one’s own gender identity, free access to medical support and hormones, and self-identification are part of a wider fight for total liberation,” and that Women’s Suffrage was a “monumental stepping stone in Aotearoa to advancements in all other human rights too.”

All in all, Brandon said, “the greatest victory of the counter-protest against assorted bigots was that we had a damn good time, a downright funky dance and pizza party, while they seemed to loathe each other’s company. I guess that’s what happens when you build a coalition of transphobic lefties and far-right New Conservative types.”