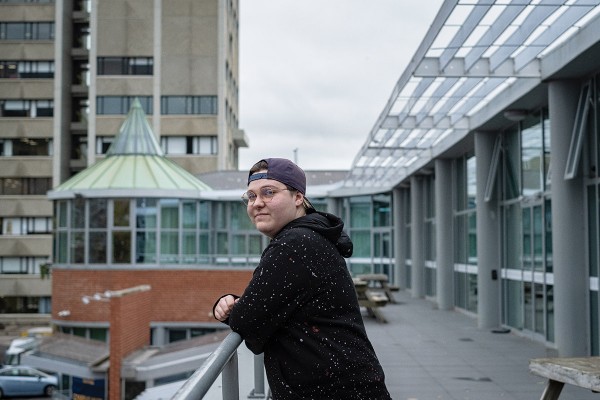 As a transgender person who was assigned ‘female’ at birth (AFAB), menstruation is a funky topic for me. My body’s feminine properties constantly remind me that I exist in a meat shell which doesn’t quite fit with my perception of myself. But my body is not as clearly binary as transphobic “basic biologists” like to believe.

I had my first period at fourteen. I remember telling my parents, to the horror of my fragile father, and joking that I should get a gift for “entering womanhood” (just you wait a few years love, you’ll be raring to leave). I really thought I deserved a present to make up for the bullshit that is menstruation. Alas, I received no gifts except the knowledge provided by Libra Girl pads and anxiety about leaking through them.

Two years passed without another shark week. Apparently that isn’t too abnormal, because puberty can take some time to kick into gear. My mum assured me that some of our family members didn’t receive a regular subscription to Satan’s Waterfall until later into their teen years.

I had what felt like another first period, because I can’t retain my own train of thought let alone remember how to put in a tampon after two years. Then there was another huge gap. And another. At the age of seventeen, I could still count all my visits from Aunt Flo on one hand. It was pretty great for me, because who doesn’t love to avoid shedding the lining of an internal organ every month? My doctor didn’t feel the same way, and after some questionable blood tests, I was sent off to the endocrinologist.

Around this time, I took my head out of my ass and started to question my gender. Exploring my feelings about my body was complicated. I couldn’t tell if my physical self-loathing was because I looked too feminine or not feminine enough. I didn’t know if I would rather get rid of the roundness of my face or the patch of long, curly hairs on my chin. Learning to love my bear legs after years of shaving and waxing could be masculine gender expression, or defiance of feminine beauty standards.

The hardest question of all was about menstruation. Do my periods feel like a personal betrayal because they don’t align with who I am, because everyone feels like that, or just because they’re so infrequent? Even while I was secretly hoping to be diagnosed with an intersex condition by the endocrinologist, I didn’t know if I wanted to justify a nonbinary gender identity or my weird nonbinary body. I still don’t know the answer to these questions, or even whether or not I’m intersex. I do know I sure as fuck ain’t a woman. It was ironic that the endocrinologist prescribed the pill, made up of feminine hormones, just as I started considering taking masculinising hormones.

Maybe there’s someone out there like me, with too much hair, not enough bleeding, and who is stared at a little too long because their gender isn’t immediately obvious. Maybe I’m trying to open people to the possibility that sex isn’t binary, that people can have a bit of this and a bit of that and it can be hard to categorise us. Nonbinary bodies are valid, whether a body fits into the sex binary but is piloted by a trans individual, or a body has had a mix’n’match of hormones and surgeries, or a body was just made a bit different like mine.

Your body is beautiful: Scars, hair, and funky genitalia included. As I write this, I am twiddling with the little patch of hair on my chinny-chin-chin and I feel grateful for my body. Yes, it has made me feel like an outsider over the years, but as someone who has come to embrace living outside the binary, I am glad my body does too.

I am masculine, I am a menstruator, and I am valid.