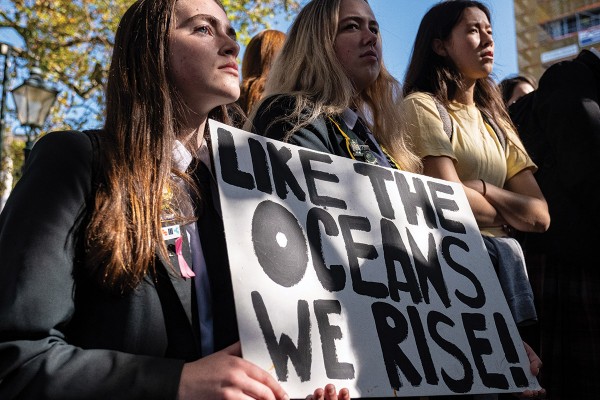 Boomers would have gotten away with it too, if it weren’t for these meddling kids

Around 1,500 people — ranging from high-schoolers to pensioners — marched from the Dental School to the Octagon on April 9th, Ōtepoti’s contribution to the nationwide School Strike 4 Climate (SS4C). Despite the Covid-19 lockdown forcing the cancellation of last year’s strikes, the protestors were keen to show that they hadn’t lost their fire.

While some dismiss the strikes as being all bark and no bite, it’s clear that many protesting beg to differ. SS4C Ōtepoti coordinator Hailey Xavier told Radio One that the strikes were a powerful motivator for climate action. The Zero Carbon Bill was “a definite push the Government took because of our strikes, as well as the local council going carbon-neutral by 2030, which Aaron Hawkins the Mayor has said School Strike had an influence on,” she said.

Speakers were at pains to emphasise these protests were a show of force, with power to influence and drive the systemic change necessary for an adequate response to the climate crisis. “It’s damn well empowering knowing that they will hear us, even if they don’t want to,” one speaker said.

Many speakers slammed those in power for simply not doing enough. Evie told the crowd that “it is time our leaders acted on their half-century old empty promises, and did not just make climate targets but took actions towards them.”

Martin made a heartfelt plea to business and political leaders. “If any of them end up hearing this speech, they should see these people and know that you are killing our youths’ futures.”

Aaron Hawkins attended the strikes — and despite being a Green Party mayor, the crowd was ruthless, keen to ensure his actions matched his ideology and public image. Chants of “not enough!” and “come on Aaron, it’s time to shine, our future’s on the line!” rang out, directed straight at him. Speakers slammed him for “standing there and not doing anything,” with one observing “It’s good to see that our local council, while not acting on any of our climate demands, have found the time to come to our strike.”

Despite the overall mood of anger and frustration at foot-dragging inaction, there was a powerful energy in the air. This was the self-assured confidence of a group who felt that change for the better was inevitable, and they were at the very forefront of it.

The optimism was neatly captured by the final speaker, James. “These are the people the world is going to be passing the torch to. Change is coming. We have grown up surrounded by this climate crisis. We’ve known nothing else. We have a voice today, we’ll have a voice tomorrow, and we will have a voice in years to come. The world is watching.”