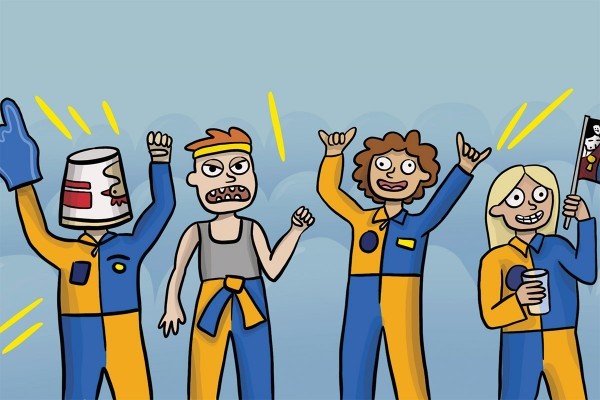 OPINION: Opinion: You Don’t Have to Go to The Rugby

Let’s just be clear on one thing: I’m not being anti-rugby. Rugby is a great game. It’s something that we orientate our identity around, both as individuals and a nation. Going to the stadium gives a lot of us a feeling of fitting in, and stability in an uncertain world.

There’s nothing intrinsically wrong with that. But I can’t help but wonder whether our fetishisation of rugby makes us lazy, and blind to the ways in which the sport could be improved.

Actually, I fear that rugby could be a distant memory in 50 years' time if we continue along our current trajectory. Rugby is actually the 16th most popular sport in New Zealand, and is played by only 0.6% of the population.

These aren’t the stats we’re meant to talk about. Rugby is meant to be as kiwi as Weetbix (which is a tax rort for the church of Seventh Day Adventists), Speights (which is owned by an offshore conglomerate and is undeniably shit beer), or shoving our grandparents into rest-homes at the first sign of dementia.

The point is that our interpersonal relationships are all governed by the cold logic of capitalism. We often get a rose-tinted vision through ads and the media, but the fact is that none of these forces give a fuck about you, or the rugby.

The stadium is set up so that you can spend as much money, and as little time watching the game, as possible. Its corporate overlords only care about how much overpriced merch they can sell you, and how much of the aforementioned shit beer they can convince you to buy at inflated prices.

Less time watching the game means more time looking at the ads too. Do you think they’d put them on the pitch if they gave a fuck about your appreciation of the match? Same with the mascots and fireworks. If you like rugby, how come you need the distractions?

The unfortunate truth of the current state of rugby is that it doesn’t bring people together in a meaningful way. Most of us think we have to go to the rugby, and we justify it to ourselves as being about ‘supporting the team’, ‘the atmosphere’, or ‘hanging out with our friends’. But the reality is that these are all for the most part justifications, not feelings. And deep down, I think most of us know that.

Also the stadium is just depressing. Fuck paying money to stand in a concrete hall that stinks of piss, listening to bad music. That ain’t what sports is about, and life is too damn short anyways.

So if you really give a fuck about the game, go grab a ball, a UE boom and some beers from countdown. Take it all to a park with some friends and have some real fun at a fraction of the cost. It might be scary at first, but you’ll get used to it, I promise.