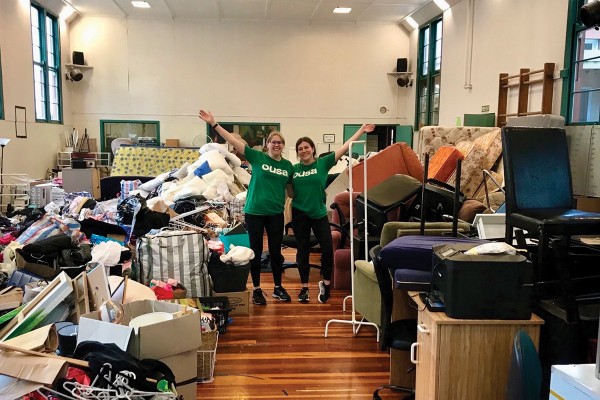 OUSA’s O Week Drop for Good initiative kept thousands of items out of landfills, and put them back in student flats, where garbage belongs. The event also made $5,400 for OUSA, according to their meeting last Monday.

“So much of this stuff is high-quality,” said Emily Coyle, Administrative Vice-President. She said that in addition to providing cheap, quality supplies to hundreds of students, the mission of the event was to highlight how much waste is generated during the annual mass-exodus from North Dunedin, and how much of that ‘garbage’ is actually in perfectly good condition.

Emily and other Exec members had a two-week turnaround from deciding to go through with the event, to implementing their collection and storage efforts. “We’d drive around North Dunedin and see people carrying their stuff to the skips,” said Emily, “and we’d take it off their hands to re-sell.”

The price-tag was designed to prevent students from taking more free items than they could use, not a for-profit measure. Still, noted Finance Officer Josh Meikle, the event gathered “enough money to cover the cost of item storage, event advertising and other operational costs.”

Items like cubes, shoe racks, and clothing can be cumbersome or expensive to store while between flats. It can be cheaper to throw them away and buy new supplies the next year. However, landlords tend to object to tenants leaving things behind for the next residents.

Drop for Good offered a solution to this, by taking the items off students' hands for free and selling them for cheap at the start of the next year, which promotes a circular economy.

Designer clothing, near-mint appliances, furniture, and hundreds of reusable coat hangers were amongst the thousands of items collected and stored in the Old Gymnasium before their sale during O Week. There was a hundred-person line on the first day of the three-day event. The majority of items collected found a new home.

Past OUSA exec teams have avoided this event, having been put off by the logistical nightmare of collecting, storing and selling so much of North D’s second-hand goods

Volunteer hours, storage space, and finances were all obstacles that the Exec bravely overcame in their effort to host a successful event. With foresight, these obstacles may be more easily avoided so long as future Execs are as capable as this year’s standard.

Sustainability is the number two priority expressed by the student body this year, and the Exec were proud to say that they were aligning their actions with the values of their constituents. In other words, they are doing their job. Ka pai.