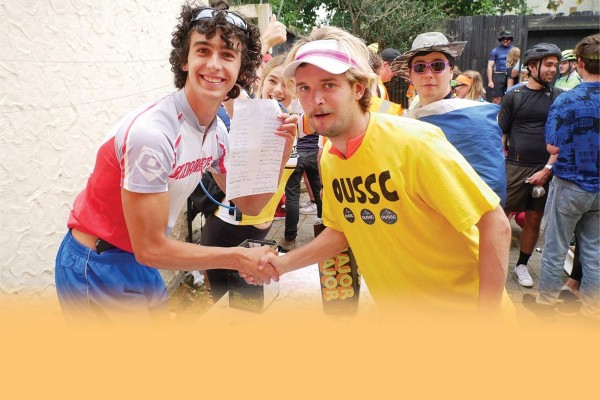 The largest club on campus is now the Sign Up Club.

Everyone so used to signing up or scanning in for Covid that there is now a club just for that. The club is formless and exists mostly as a Facebook page. But its numbers are rapidly growing.

“We don’t want to overshadow Covid,” said founding member Devon Burns. “We want people to be able to scan in, and sign up, at the same time. Like some sort of package deal.”

The spontaneous, loosely-organized, and somewhat-shadowy group has cracked 700 members. At a BYO on Wednesday, founder Reid Eberwein called for a thousand members by the weekend. Reid also emphasised that it was “definitely not a cult.” Devon said that while it’s not a cult, or multi-level marketing scheme, it is a “multi-level marketing strategy”.

Critic attended the BYO to see if this was true. The night ended with Sign Up Club banned from 100% of BYO locations it has attended (i.e. Taste of Tandoor, who did not sign up).

“Sign Up Club is the best club I’ve ever joined,” said member Keegan. “There’s no dues, no commitments, and no judgement. It’s perfect.” This, according to the founders, is the point of Sign Up Club.

“You don’t need to know anyone, you don’t even need to have an interest. You just need to sign up.”

The first sign-ups came from Otago University Snow Sports Club (OUSSC) events, but the club has quickly expanded to new territories. Devon said that she estimated the BYO attendees to be majority non-OUSSC.

Ex-OUSSC Exec member Gemma said that the club’s meteoric spike in popularity without any real organization “just goes to show you how little bureaucracy you really need to run a club.”

Several of the students Critic spoke with said that they only knew a few people at the event, and “just came because we saw the event on Facebook”, but that they were having a great time and meeting new people.

“We saw them at a table with a sheet of paper at Tent City,” said one student, “we asked what it was and they said it was sign up club, and that all we had to do was sign up. And now we're here.” The club is not OUSA-affiliated, and isn’t planning to be.

Marty told Critic that the only person he knew at the BYO was a classmate who had invited him to sign up on Facebook. By the end of the night, Marty had made a new friend and gone home to be introduced to Ru Paul’s Drag Race before hitting Pint Night.

“It’s been a great way to meet new people,” said two lads between bites of curry. A server shouted out orders over the hectic conversation. Behind them, four toilets clogged, overflowed, and began forming a lake inside the restrooms. On the other side of town, someone on Facebook invited three friends to join Sign Up Club.