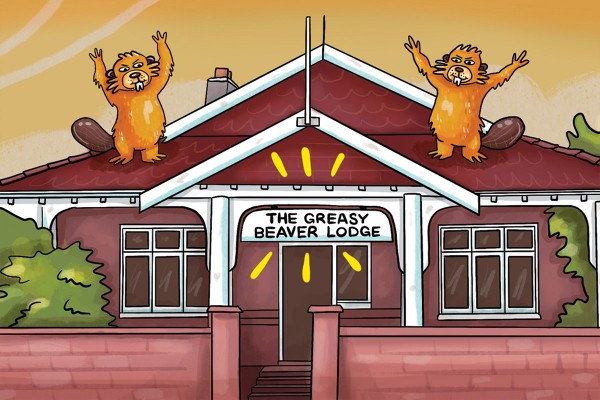 The Greasy Beaver Lives to Beave Another Day

The Greasy Beaver Lodge is back, baby. The famous flat sign was resurrected three weeks ago, after the tenants made a request to their property manager.

“The guy who put it back up didn’t realise what it said until he put it back up and took a step back,” said Annabelle. “He blushed when he saw it. A lot of people do.”

“When I first met the tenants they really wanted it to be put back up, so we put it back up,” said Matt Cutler, of Cutlers Property Management. Cutlers took over managing the Greasy Beaver from Jenny Adamson at the end of 2020.

“We were always going to say we’ll just put it up ourselves, screw the uni or whoever decided to take it down,” Annabelle said.

The sign was taken down at the end of 2019. Then-property manager, Jenny Adamson, described it as “offensive” and said that it did not “depict nicely what the flat is about.” She also said that “landlords should have a say” in what the flat was called.

“When the sign got taken down our flat looked pretty boring from the outside,” Annabelle said. “When we got the sign back, we could finally say we’re in the Greasy Beaver and everyone knows immediately where we’re from.”

She said that even her mum likes the sign, after initially seeing it and thinking she would never let her daughter live in a flat like that. “Everybody’s family and friends in the flat were just heartbroken when it was taken down,” she said.