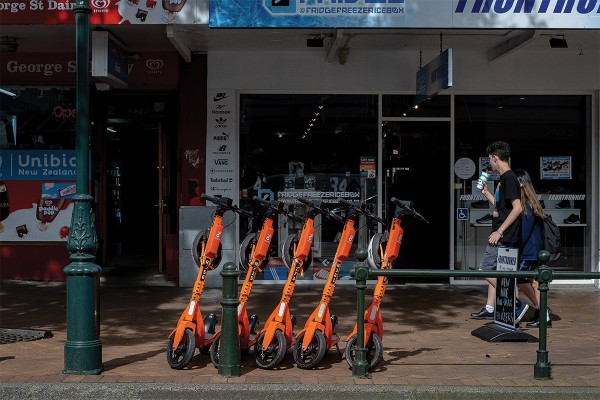 There’s a Neu Ron in town

As well as their striking orange colour, a few other differences set them apart from Lime. Adam Muirson, Neuron’s regional manager, claims a “safety-focused” culture is the key difference from their citrusy competitor. Their scooters are “visibly bigger and sturdier,” with an attached helmet which releases when you unlock a scooter, and “voice guidance” regarding safety advice. As well as that, they feature “topple detection,” which can sense when a scooter has fallen over, and an emergency button handy to call 111 if things get really bad.

Neurons match Lime on price, at $1 to unlock the scooters and 38c per minute after, but also have a “Student Monthly Pass” allowing 90 minutes of riding every day for $60 per month. You’ll need a student e-mail to sign up for this. Non-students will pay slightly more, at $89 per month, while there are also options available for 3-day passes ($25) and weekly passes ($33).

Shar Mathias, a student who rode a Neuron to South Dunedin, told Critic that they felt very similar to Limes, but slightly more stable due to their larger wheels and bases. She also felt the helmets were “a great idea.” Although neither the Dunedin City Council (DCC) nor Neuron would officially comment on limiting e-scooter speeds, Shar found that they topped out around 25km per hour. For longer journeys, their relatively slow speed and lack of suspension was an issue, as was their pricing, which she felt was too close to that of an Uber.

Until this year, there were no council regulations around e-scooters, although the DCC had a memorandum of understanding (a slightly more informal agreement) with Lime. However, from the beginning of 2021, all e-scooter companies must apply to the DCC for permits. Lime and Neuron each received a permit from 1 January to 30 June 2021. This allowed each of the two companies to release a fleet of 250 e-scooters onto Dunedin’s sidewalks.

The permit conditions mean that e-scooters can’t be used in the Botanic Gardens. Nor can they be operated between 12am-5am, according to DCC Compliance Solutions Manager Ros MacGill. Although there were no commitments to introducing permanent speed limits, the DCC are open to introducing them in areas where events are happening.

The six month permit will serve as a trial period of sorts for Lime and Neuron, with the DCC evaluating their performance around their promises (such as “dealing with poorly parked e-scooters within two hours”) as well as collecting data around e-scooter activity (including number of scooters, as well as the duration and distance of trips).

Neuron stated that apart from providing data to councils, they would generally only share rider data if asked to as part of a police investigation, and would also be open to sharing it as part of Government contact tracing efforts. Muirson did not indicate whether this was likely, but said that “obviously New Zealand is in a good position when it comes to the pandemic.”

Lime did not respond to a request for comment.