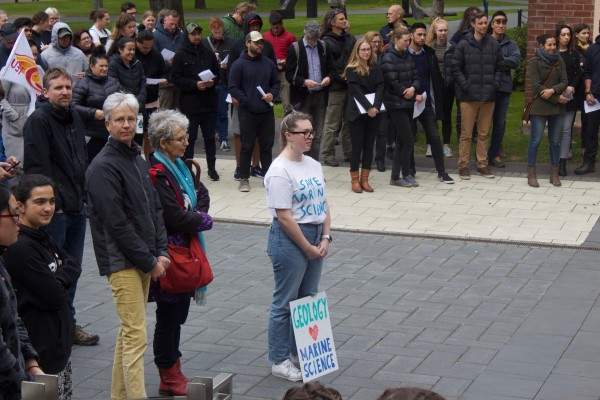 Three weeks ago, the Pro-Vice Chancellor of Sciences, Richard Barker, proposed a management of change that would see a significant cut to the Department of Marine Science faculty.

The proposal would reduce the department’s academic staff to 8.0 or 9.0 ETFS (equivalent full-time status). This would be a drop of 6.0 or 7.0 EFTS.

Multiple students and one anonymous academic from the department spoke to Critic about their concerns with the proposal. They called it a “crazy” and “painfully short sighted” decision. At the time, the University assured students that they would be consulted before the submission deadline of today (25th of October). This student consultation happened last Friday, but was not good enough to stop a rally of over 250 students and faculty members.

William Dreyer, OUSA Education Officer and rally coordinator, came equipped to the rally with all 6.5 thousand signatures from the online and physical petition. In his opening speech he said “it feels like the University does whatever it wants with the student voice. But here we are with six and a half thousand signatures.”

Will said, “of this one hundred and fiftieth year of the University, I dare the University to prove that they listen to the student voice.”

Eight students spoke in support of the eight staff members who are within the scope of the cuts. All of them explained how that particular staff member shaped who they are today and how their passion and expertise convinced them to pursue marine sciences in the first place.

One student told Critic they participated in the rally because “stripping marine science is incompatible with the fight against climate change.” Another student pointed out that it was “bullshit” that the University “plans to spend $95 million on a new residential hall instead of saving our oceans.”

One of the speakers told Critic that it had been difficult studying for their exams while dealing with the “stress” of this proposal. They said, “what is the point if my lecturer is being axed?”

An anonymous faculty member from a separate department told Critic “no science academic feels safe anymore” and that “everyone feels under threat.” He said that when jobs do not feel secure, “the best people leave”, students stop enrolling, and it becomes a self-fulfilling prophecy.

Tertiary Education Union organiser Kris Smith told Critic she was “hopeful” that the University would “take heed” of the submissions.

The rally was closed by almost one hundred and fifty students and staff submitting different pages of the petition and individual submissions. Will told Critic he planned on “drinking for the rest of the day” now that this was over.