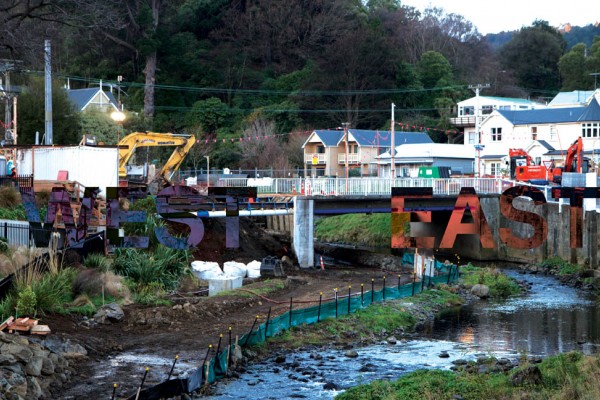 The Otago Regional Council has confirmed the Dundas Street Bridge construction will be postponed for another three months, opening in October instead of August. This delay is apparently because it is very mysterious “what happens underground and where” and apparently there was no way for the project planners to have known how tricky it would be to dig around a bit, or whatever they are doing behind that wall. Maybe we will never know what is underground? There could be moles. Or dirt. Or diamonds. Or worms. Idk what’s underground. Popular culture taught me everything I know.

What we do know is that the additional work/infrastructure required to go ahead will include MORE WALLS next to the properties closest to the river. The ORC added that they will need to move and replace water mains, which may mean that the disenfranchised peoples of East Dundas will lose access to drinking water as well as their freedom. Shocking.

However, on a much more positive note, an ORC spokesperson added that they are “looking at ways that we can open the bridge to pedestrians earlier than the October timeframe”. They did not specify how they would make this happen, but Critic presumes that a big ol’ bridge that goes over top of the old one will be an option.

Additionally, the ORC claim that a project of this nature requires “thinking outside of the box”. Considering the whole site is one big box, Critic believes this could be the source of all their problems.

Critic interviewed one unnamed resident of Communist East Dundas street who, once we were able to translate his answers (he wasn’t foreign, just cunted), said that it had been so long since he had seen his family on West Dundas that he was beginning to forget what they looked like.

Another resident, Berlina Ichbin, said she had been leading lobbying efforts against the ORC to take down the wall by Re-O week, but that her main obstacle was that the construction was so loud that the ORC people could never hear what she was saying on the phone