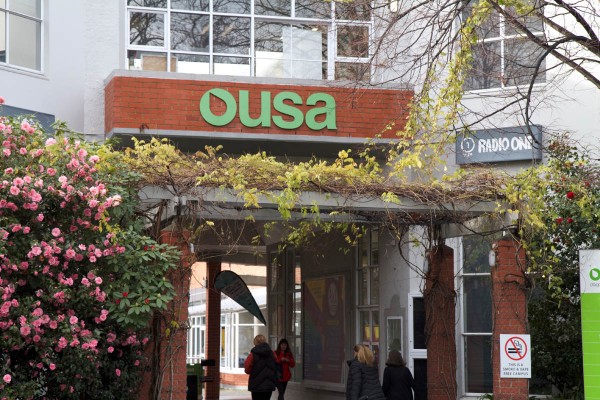 In an impressive show of #studentengagement, 38 student submitted questions ended up in the upcoming OUSA Referendum. Admittedly, Critic submitted 21 questions, but most of those were actually submitted to us by students. Critic Editor Charlie O’Mannin is still sad his question to get OUSA to change its logo to a “big ol’ dick” didn’t get through. “This is a dark day for democracy,” Charlie muttered to himself while staring into the mirror and softly weeping.

Because we’re STUDENTS and obviously can’t think about anything other than ALCOHOL and PARTYING, a grand total of four partying-related questions were submitted to the OUSA Referendum.

In two separate questions, students will be asked whether the Hyde Street party should admit first-year students and whether it should have expanded capacity. Critic supports the first question on humanitarian grounds. Freshers are students too. On the second question, people who live near Hyde Street get flat tickets anyway, might as well make their streets a part of it too. But what would it be called? The Clyde, Hyde, Leith, corner of Albany and Frederick Street Party? The CHLAF Party? What an unattractive word.

Students will also be asked whether OUSA should attempt to buy the Marsh Study Centre off the University and turn it back into the Gardens Tavern (aka Gardies) and in whether OUSA should attempt to buy the University’s Frederick St offices and turn the building back into the Bowling Green Tavern (aka The Bowler). This would absolutely never happen, the University is more likely to reveal Charlene Chainz’s real identity during a sick freestyle at convocation than relinquish their stranglehold on two of their defeated enemies, but isn’t asking pointless questions what the OUSA referendum’s all about?

Either Otago students are very environmentally conscious, or a single enviro-warrior spammed Admin VP Porourangi Templeton-Reedy’s email, because six environment/sustainability questions will be in the referendum, including a bunch about lobbying the University to be more sustainable, and also whether OUSA should put solar panels on all its buildings, you know, because Dunedin is drowning in sunlight.

These are cool questions and the answer to all of them should be yes. Oh, sorry, we need to be more balanced? Um, vote no if you hate the planet. There, balanced.

In a bunch of nerd questions, students also thought that OUSA should be structured differently. One question will ask whether OUSA should investigate the establishment of an OUSA Ombudsman, to neutrally investigate complaints against the Executive. What’s an Ombudsman, you ask? According to a survey of Critic staff, an Ombudmsan is “like a spiritual weed dealer, but legal”, “someone who has lots of buddies” and “someone that, like, helps you?”. We concluded the word should definitely be Ombudsperson or Ombudsfolk because ‘Ombudsman’ is sexissst. Anyway, Google said an Ombudsman is a public advocate who represents people’s interests, investigates complaints, violations of rights and generally holds people accountable. We thought that was what Critic was for, but ok.

There was also the obligatory question of whether OUSA should leave the New Zealand Union of Students Associations (NZUSA), which they ABSOLUTELY SHOULD NZUSA ARE GARBAGE WHY ARE WE PAYING THEM $45,000 A YEAR TO HAVE SEXUAL HARRASMENT SCANDALS AND FAIL AT REPEALING VSM ALSO THEIR ACRONYM SUCKS AND SOUNDS LIKE THEY DO SPORTS EXCHANGES WITH THE UNITED STATES.

Should OUSA lobby Lime for discounted fares and to not cut off at midnight? YES. LIVE, LOVE, LIME. While you’re at it OUSA, can you also lobby for my Lime account to get refunded for a $15 ride that I apparently took last Friday night but can’t remember? Cheers x

Students will also be asked whether OUSA should hold a competition to see who can eat the most limes (the fruit, not the vehicle). If this goes ahead Critic will hold a rival Lime eating competition (the vehicle, not the fruit).

Please, please, please vote ‘yes’ for OUSA to lobby the University for longer Mid-semester and Winter breaks. Even if you don’t answer any other questions - vote this one. Everyone would be so much saner if we actually got a break in the middle of semester, rather than just having a week to catch up on assignments and maybe sleep. Can they also lobby for lecturers to not set assignment deadlines in the break? Please and thank you.

The people want OUSA to lobby a lot. Lobby the DCC to oppose the expansion of paid parking in the student area. Lobby the Uni to actually observe tenancy laws for UniFlats in regard to notice before entering. Lobby for unrestricted Wi-Fi. Lobby for residential colleges to discount rent for Residential Assistants so that their pay entirely covers accommodation costs. Lobby, lobby, lobby.

Question 29 is that Critic make more video content. We didn’t submit this question and were honestly shocked when we saw this in the referendum. We did some investigative journalism and in a shocking expose found out that it was submitted by Bonnie Harrison, OUSA Finance Officer. Critic will not tolerate the Exec interfering in Critic business. We’ll do what we fucking want.

We were actually planning on doing more video content, but regardless of the result of this question we’re fucking not now. Fuck you, Bonnie. Keep your referendum questions to yourself. We encourage everyone who respects the freedom of the press to spoil your vote on this question in protest.

Because Flameboi turned out to be such a disappointment, students need another beer-inspired icon to get them through the rest of semester. Question 20 asks whether OUSA should fund and support the creation of a student owned and run micro-brewery and shop in North Dunedin. Critic supports this question on the condition that we get unlimited free moonshine.

Every President is looking to leave a legacy. James Heath, we know you’re wondering what yours will be. Look no further than question 39, which asks whether OUSA should change their colour from green to orange. If OUSA changed its colour to orange, forevermore will students be reminded of your glorious hair as they stare wistfully at the Clubs and Socs building from Central Library.