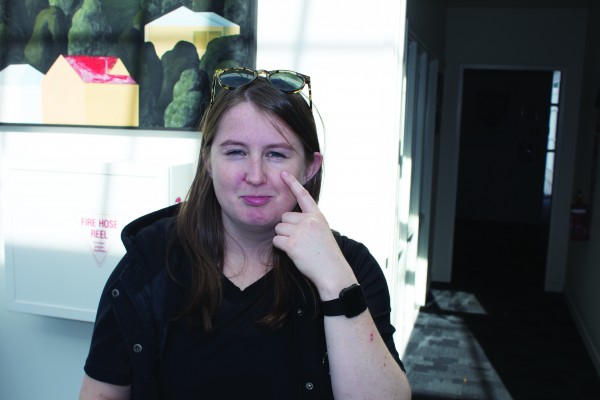 OUSA President Caitlin Barlow-Groome is leaving our fine institution and plans to move up in the world of student politics and run for NZUSA President.

What do you think your most rewarding moment was as OUSA Pres?

Ah that’s tough, do I only get to choose one? Reflecting on the whole year is kind of hard but the first thing that comes to mind is the recent influence we had in Senate for Art History. To be honest, I never thought we’d get more than 10 people voting to try save it as a minor, let alone 31, so I was pretty proud of that.

What about the toughest moment?

This is hard too. I think internal stuff is hard. I definitely didn’t understand what I was actually getting into being President. Managing someone who’s twice your age or dealing with people who disagree with you and having internal problems in the Executive but trying to not make them public and trying to make sure we’re a team and standing together even if we’re struggling internally. It can be tough making sure everyone’s on track with their roles too.

You mentioned that you are responsible for people who are older than you, and you work with people who have more qualifications than you in the University leadership, do you think you were prepared for that and what has it taught you?

I don’t think I was prepared. I have learned that my opinion is valid regardless of how old or how educated I am. At the end of the day the University is based around the students and so my opinion is the most qualified one, so I should be respected just as much as someone who has their PhD.

Is that a message you want students to know?

Yes definitely. Even if you’re not a student representative your opinion should still be heard, whether it be in class if you’re not happy with an assignment or really anything related to your student experience.

You brought up internal issues within the Exec and there have challenges right from the start of the year when Abi was threatening a no-confidence vote around your first NZUSA vote, Kirio’s resignation and recently conflict with Josh Smythe, looking at those things now, did you manage well?

I think I managed the best I could at the time. I think the best thing to do is stand by what you want, and I think I did that.

Is there anything you’d do differently in hindsight?

To be honest not really. I think the situation at the beginning of the year [with Abi] nipped petty bullshit right in the bud at the beginning. I don’t stand for personal attacks – as you would have seen when I was really against the personal attack against Dave Scott – so I think that stopped our Exec doing that from the start. I’d probably deal with everything exactly the same.

Including No-Confidence in Kirio going to a SGM?

That wasn’t up to us, that was the student body’s decision. We couldn’t do anything about that.

You’ve been the Finance Officer for NZUSA and there’s been significant things going on with NZUSA finances this year, do you feel like you’ve managed to balance that and do as much for NZUSA as you wanted?

At the beginning I thought that if I wanted to do NZUSA work I had to do it on top of OUSA. But, looking back I feel like every President whose association is part of NZUSA should give a couple hours a week to it. If you’re part of the national voice you should be part of the association and have your say. The more people engage with NZUSA the more they understand how the operations work as well as the work that goes on that gets talked about in monthly meetings. I think in hindsight, I don’t want to say I did too much, but it definitely wore me out as I was doing it on top of my 40 hours for OUSA.

What’s one thing you really wanted to do going into the year that you haven’t been able to?

I campaigned on having a lively campus. I’ve made good changes, we’ve put the table tennis tables out and we’ve got board games and bean bags, but I wanted there to be more. It’s in the works, but I just like things to be done. I’m not very good with the slow processes of the University. So I wish I could’ve done more on that front.

You considered running for President again but were convinced out of it, why? Was there more you wanted to do?

There were things in the works I wanted to see achieved. I had a big focus on the compulsory student services fee, not just in Dunedin but on all campuses. I feel there was good enough consultation at Wellington and Christchurch, obviously there’s always room for better. But, in my eyes there was nothing in Dunedin and Invercargill. To me, that’s infuriating because they’re still Otago University students and they deserve to have their voice heard. That was one thing really keeping me wanting to stay at OUSA, but then I went back and forth and asked ‘is one issue that I’m really passionate about worth staying at OUSA, or should I be looking to bigger and better issues to be fighting for?’

What is next for you? Are you putting your name in for NZUSA President?

I will put my name in the hat there, yes. I don’t think I’ll be a politician, but a student politician, sure.

Have you kept your election promises that you ran on in 2017?

I decided to run on one issue, which was having a lively campus. I’d rather under-promise and over-deliver than over-promise and under-deliver. I had other things I wanted to achieve too, like compulsory student services fee stuff. I feel like I’ve achieved enough of what I campaigned on but there’s always room for more. I didn’t know exactly what I could achieve, so I didn’t want to promise things I couldn’t do.

Even after being on the Exec for a year you didn’t know?

Yeah, I don’t want to say ‘I was a 10-hour’ but you’re not nearly as engaged as the Recreation Officer [which Caitlin was in 2017] as you would being the Administrative Vice-President to understand what the President actually does.

Do you have any advice for James?

What are things you want to see in the long-term for OUSA?

I hate to be a super nerd, but there’s definitely internal OUSA things I want to see. I want to see structural changes to the association. You also need consistency for those things, which is hard when you have annual turnover. It’s a long game. Other than that, I’m excited to see what next year’s Exec brings. They’re very different to who we are, James has come from educational background as Education Officer – compared to me coming from Recreation Officer, so it will be different. It will be good though.

Will you stay involved, looking over people’s shoulders?

Oh yeah, James can’t get rid of me.