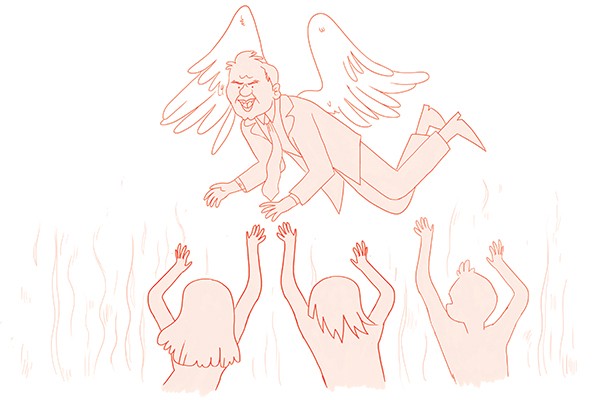 We are at a stage where, for all the analysis, all the hearsay and all the expertise, things are just uncertain. It’s both frustrating and rapturous; plain and radical. Winston Peters, the leader of NZ First, is waiting for the special votes to be finalised on 7 October and is consulting with his party about who they’ll go with. Will he go with National or Labour and the Greens?

The news media has gone mad with uncertainty. There is a void of meaning and they’re eager to fill it. “Ardern and Davis to lead negotiating team” was one headline last week – no shit. Patrick Gower is focusing on the potential clash of personalities between the National and NZ First caucuses – someone once called someone a doorknob or something! Meanwhile, Peters, snapping between trademark grin and frown, is fronting the press gallery at parliament; giving them a telling off and instructing them to be ashamed of themselves for their “speculative drivel”.

I have no idea if we’ll have a National/NZF or a Labour/Green/NZF government. I’ve leaned towards Peters going with Labour, but I was probably being dishonest. In truth, I seriously propose that we just revel in the fact that for once we can’t turn to the screens of our computers and devices for a quick fix, for things to be predicted and resolved.

Before election night we couldn’t even say, without pages of circular qualification, what was going to happen. It was no longer in our hands. In democratic elections, “the people’s will is our equivalent of what the Ancients perceived as the imponderable will of God or the hands of Fate,” as rockstar-philosopher Slavoj Zizek puts it. As much as we try and rationalise this crazy ritual – where your dumb uncle, your racist grandmother, the Lambton Quay yuppies and the farming conglomerate vote for our leaders – we cannot escape the simple fact that, for all the prophetic pig entrails we inspect, we just don’t know.

Now it’s Winston’s will that takes the place of transcendental authority. As much as the journalists probe him, he will not grace us with his thinking. He has become the patient statesman; standing over a map of the landing beaches with his closest advisors, contemplating strategy and the fate of the land. This is sacral for him, a Winston that can somehow be arrogant and humble about his role.

Election day itself is not even really over yet. There are the votes of 384,000 people still to be accounted for. That is 15 percent of total votes and, looking back at the last two elections, National could easily lose one or two seats to the Labour/Green bloc.

That no one can agree on who won and who lost on the night intensifies the unusual uncertainty we face. Nonetheless, the clear distinctions of winning and losing sooth our anxieties about the grey zone we have entered. We could find some meaningful interpretation here and say that the Māori Party lost, most likely because of their pragmatic decision to stand next to National rather than be cast aside to the opposition benches these past nine years.

David Seymour was another loser. He will return to parliament as the only ACT Party member there, heading a party that won less than a quarter of the votes the Opportunities Party did. In courting NZ First, Bill English has confirmed Seymour will have no place in the next government. (Another loser: the Internet Party – but you don’t need to be told that).

I wouldn’t necessarily say Gareth Morgan and the Opportunities Party, whose preliminary count is at 2.2 percent of the vote, are losers. They have made a name for themselves as an alternative voice and this is not the last we will see of Morgan. Even if we don’t see him, Twitter will make sure to notify us about something questionable he has said.

There’s still something fundamental missing – a government. One does get the feeling that there has been a vote for change and that the long reign of National and friends might have already reached its peak. But then again, English seemingly managed to fight back against a re-energised Labour Party. ‘Jacindamania’ was disarmed by the immune system of middle New Zealand’s boring old comfortableness, content with soulless ‘fiscal responsibility’.

For more clarity on Peters’ possible trajectory, we could look to history. In the run up to the 1996 general election (the first with the MMP system), Peters and NZ First campaigned heavily against the incumbent Jim Bolger-led National government and its continuation of Labour’s major neoliberal reforms. However, after gruelling coalition negotiations, Peters went with Bolger. In the 1999 election, Peters was punished for it, losing the majority of his support and twelve seats. Time will tell as to whether Peters wants to risk repeating that.

In this enigmatic purgatory, all we can do is wait. We can extrapolate regarding the loss of the Māori Party, contemplate a future role for the Opportunities Party and look back to history in an attempt to crawl into Winston Peters’ head. But we can’t really go beyond that. We should rejoice in this uncertainty. In an era where everything can be explained in a few ‘real-time’ glances and anyone can know one thousand different things about one thing with the click of a button, it is a refreshing experience to just resign ourselves to the unknown.