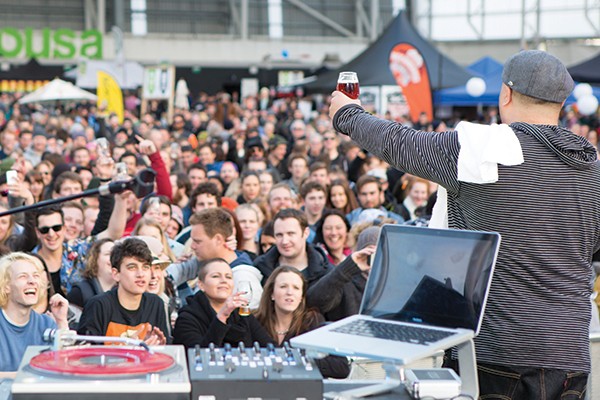 In its fifth year, the Dunedin Craft Beer Festival is on track to be the biggest it’s ever been. From a small event entirely based on the concrete slab at the Otago Daily Times end of Forsyth Barr Stadium the event has expanded to encompass the entire field.

The festival was originally proposed as part of a Masters of Marketing assignment, and OUSA saw it as an opportunity to engage with the local community and to provide more events focused on older and postgraduate students, who don’t otherwise attend many OUSA events. It was never intended to grow into the phenomenon it is today.

According to OUSA Events Co-ordinator Luke Matsopolous, 2017 was the first year they have ever had to turn away breweries. “We’ve got an insane amount of vendors. 60 at least. We had one drop out, but now we’ve got a waiting list wanting to get in.”

“The feedback I’ve had from our vendors is that they absolutely love it. The whole day, the atmosphere. There’s no malice, everyone’s in good spirits. Last year we had like 380 different beers, it’s stupid. Breweries come down with like 12 different beers. Garage Project every year sells out by like 3:30 every year.”

More breweries from more locations around the country than ever will be on show, with most breweries planning a special festival brew which will begin brewing over the next week or two. Radio Hauraki hosts Jeremy Wells and Matt Heath are returning as MCs, and will be profiling many of the participating breweries on their show in the leadup to the event.

6200 tickets were put on sale, and have now completely sold out, eclipsing sales figures from previous years. 2016 was the only other year to sell out, and even then, only did so in the final days before the event.

The unprecedented ticket sales have forced OUSA to rethink their marketing strategy. “We were going to the traditional ticket sales route, but now we’re going to have to refocus on promoting our vendors,” said Marketing Manager Kat McLennan.

Dave Dobbyn has been announced as the headlining act, with support from Goodshirt and Nomad. “We wanted to really focus on our demo,” said Matsopolous. “We wanted to have music which spanned the age groups, have one for the older age group and acts that are just coming through for the young ones.”