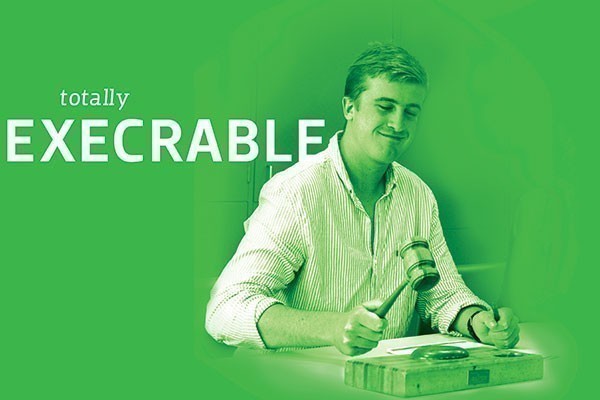 Keeping tabs on the Exec | Issue 21

“We admit we have dropped the ball” - OUSA Executive Take Some Blame for Silence...just 233 days into the year

The 2017 executive have deteriorated into depths not seen since, well, last year, during the most recent two meetings, passing motions that to anyone who actually cares are outrageous, especially in light of the budget cuts the association is facing.

University student Francis Bradley came along to ask what OUSA is doing politically, given that the election was just 32 days away at the time of the meeting, which took place on 22 August. OUSA President Hugh Baird immediately responded, “if we align with certain parties and they lose, then it’s very hard to work with the winners, so we don’t support political parties. It’s a shame you didn’t come to speak about this next week with all of the political events happening.” Bradley responded by stating, “the events this week are great but I haven’t seen any advocacy at all. I’m doing this out of concern for the student interest.” Critic asked, “which policies have you publicly endorsed so far this year?” Baird said “none yet. We will do that in the near future.” Education Officer Bryn Jenkins then said, “with Critic[‘s articles] and now you [Bradley] coming along, we admit we have dropped the ball on that front [not supporting political policy in the student interest].”

At last week’s meeting, with just over three weeks until election day, there had still not been any policy endorsements from the association. After discussing how they should most effectively address endorsing policy (a conversation that clearly should’ve been taken place months and months ago), Admin VP William Guy asked whether they should support Labour’s education policy announcement, which Jenkins said would “not be fair on all of the parties who have announced policies earlier in the year that are also in the student interest”. President Hugh Baird asked whether the executive backed him to make a judgement call when a new policy is announced, to which Guy seemed to speak for the whole executive when he said “no”, as Baird then proposed another idea of “making a ‘wishlist’ of the five biggest issues to students ... making a press release asking for those things … [and then] sending it to each [relevant] minister and find out what they’re doing on those issues.” They ended up deciding that these issues would be: 1. Student living costs; 2. Student allowances; 3. Rental housing quality; 4. Mental health; 5. ‘First in the family’ scholarships. As to whether student debt should be included in that list, Baird noted, “student debt is not an issue for students”.

On a more positive note, the group discussed the upcoming referendum, and stumbled across the issue of whether they should be binding or non-binding in the future (the next being held from 9-11 October). Baird and Guy instantly said they were in favour of non-binding referenda and, as they went around the table declaring their own individual decisions, Jenkins, Welfare Officer Danielle Pope and Recreation Officer Caitlin Barlow-Groome all backed binding referenda, but were clear that certain regulations had to be tightened up. Baird said that he would be in support of binding referenda if people had to put their name to the questions they submit. University student Kirio Birks, who was sitting in on the meeting, informed the executive that most referenda are only binding “if a certain margin is achieved,” to which Jenkins added, “we want students to engage [with our referenda] and we’re not doing a good enough job on this”. With everyone suddenly agreeing that referenda should now be binding, Barlow-Groome asked what percentage the margin should be? Baird said 70 percent, to which Birks noted that 66 percent (or ⅔ of the vote) is standard process; for some reason 67 percent was the margin the members decided to choose.

A budget proposal for 2018 was accepted and will be put to students...