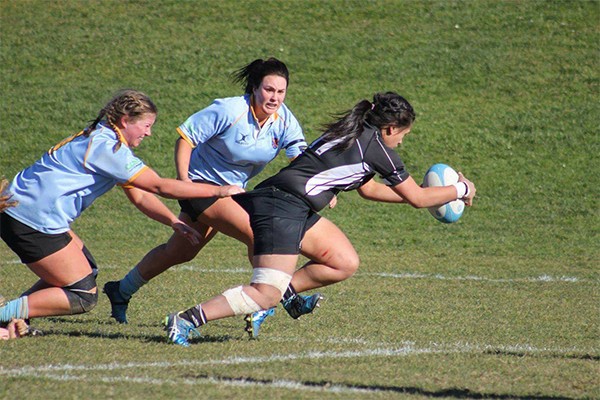 Last Saturday the two top women’s rugby teams, University and Pirates, battled it out for the championship trophy at St Clair’s Kettle Park. The conditions were very blustery and the wind added a considerable chill factor as well as an extra challenge for the players. Both teams lined up on the field for a moment of silence for the Pirates coach who passed away two months earlier, as well as two life members from the Varsity club. The final began with a short blast of the ref’s whistle with the first kick-off coming from Varsity, who started off playing into the wind. Pirates managed to dominate, scoring early, but Varsity fast regained their composure, driving the St Kilda based team back into their own half. Unfortunately, little mistakes meant that they couldn’t finish it off with a try and Pirates managed to score another runaway try. The Varsity team then made their comeback with a nail-biting run from winger Rian Sanrieve down the sideline, where she managed to safely dot the ball down over the try-line. Throughout the game the Varsity team showed off some pretty spectacular defence, managing to hold out the powerful Pirates just inches from the sideline. Unfortunately, the second half still ended with the Bookworms down 17-5.

The second half started with a hiss and a roar as both teams came out firing after their break. The determination for that trophy was clear. The fitness from Varsity came shining through, as well as the strength of their team, shown by the impact made from the bench. Pirates still dominated, continuing their ominous lead, and it was becoming hard for the Bookworms to keep up. Sparks flew and anger was building, but both teams managed to keep their composure. Georgia Mason of Varsity managed to get a sneaky pass from centre Sophie Dyrhberg to score an impressive try, but they did not manage to topple their opponents, with Pirates scoring two tries in the second half to finish the game on top, 27-10. The Pirates celebrated their victory after the match, where they received their trophies and gold medals. Captain and flanker Angie Sisifa gave a humble and heart-warming speech, dedicating the game to their coach who passed away, and thanking her teammates for a great season and Varsity for excellent challenge and competition.

Varsity co-captain Tegan Hollows then gave a great speech dedicated to her Bookworms, and their excellent prowess on the field this year, as well as thanking their outstanding coaching staff for their tireless efforts.

All in all a fantastic game and a great way to end the women’s competition in Dunedin.