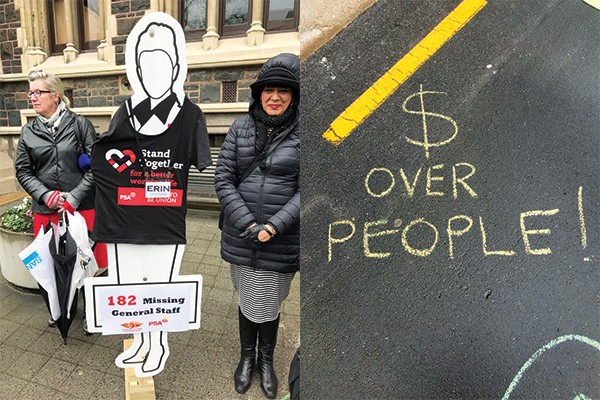 Set up by the Tertiary Education Union (TEU), the protesters drew chalk-outlined bodies on the road outside the building to symbolise the immense toll the proposal will take on each individual staff member who is made redundant, as well as the wider effect on their families and the community at large.

Messages to the university were written inside the bodies such as, “$ Over People”, “They Don’t Care”, and “Shame On You”, among many others.

A short address to attendees by Phil Edwards, TEU National Vice President and Otago Polytechnic Academic Leader, touched on the university’s ‘business case’ that has resulted from the Support Services Review, which he considers to be a “mystery wrapped in an enigma”.

He explained that “most of the time these things are a fait accompli, so before it gets to the consultation phase the decision has been taken and I don’t see this [process] as being any different.”

University of Otago Vice Chancellor Harlene Hayne said to Critic that “the reason that the university are reorganizing many of our services is to be more student facing and more responsive to students’ changing needs, as well as looking into more effective ways to use the tuition fees and tax funding we receive.”

“The next few months will be a challenging time for staff, and I strongly encourage them to offer their views and ideas as part of the consultation process,” said Hayne.

TEU Organiser Shaun Scott revealed that though the University of Otago has proposed 182 FTE staff cuts, he believes it will end up being “well over 200 in the end ... It will be clearer when there is more detail, which could be when they [University of Otago] get into the formal Management of Change process.”

Divisional Forums aimed at seeking consultation with staff took place over the last two weeks, with Health Sciences and Operations remaining on Monday and Friday respectively.

An email sent out to union members on Monday last week reminding them of the protest, spoke of the insensitivity of Hayne’s ‘bodies on the ground’ comment following the cuts, a remark “designed to reassure,” but which “indicates the disastrous effects to everyone – including academics and students - of the staff reduction”.