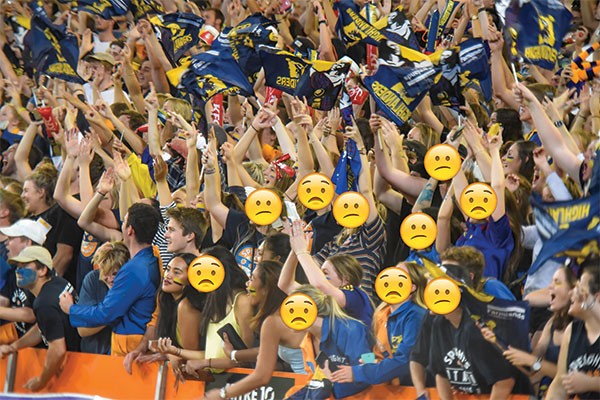 If there’s one problem with sports, it’s that you have to pick sides, one side wins and one side loses. No other entertainment product has this problem. Unfortunately, I was on the losing side on Friday night as the Chiefs made the trip to the lunch box to take on our beloved Highlanders. It was lucky game number seven for the Chiefs, who had lost their previous six on the trot to the mighty south, but it was really a game that the Highlanders lost more than the visitors won.

Bad decision making and poor basic skills let the home side down. The Highlanders gifted tries like they were Indome Noodles at orientation and dropped more balls inside the Chiefs twenty-two than Hermitude had dropped bass the night before. On more than one occasion, the Highlanders were poised to attack, only to spill the pill trying to force an extra pass that wasn’t needed.

For their part, the Chiefs had a rock solid defensive wall that would have made Trump envious, but other than a moment of set piece brilliance that saw Hika Elliot sneak down the blindside for a try from a lineout, the Chiefs could just sit back and wait for gifts. Two early intercept tries killed the home side’s confidence and with that the game was lost.

On a positive note, new signing Tevita Li looked dangerous, and the Highlanders lead on every stat other than the one that mattered—the score. Another positive about the game was the atmosphere. You have never really been to a game until you have been to one in the Zoo. The heaving mass of sweat and foundation was in fine voice on Friday. The Zoo is the one place where freshers and 3rd years are on equal footing, making for a night of education for one and a sleep-over in their old hall and a walk of shame in the morning for the other. Highlanders games are one of the true highlights of any degree at Otago and, unlike 9am lectures, they are not to be missed.