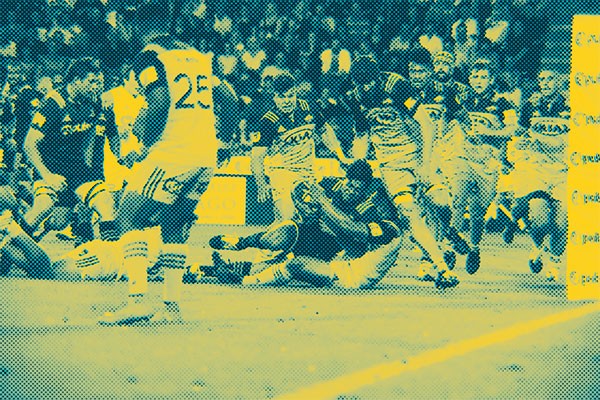 With the Scarfies back in town, the main event of Orientation Week gets ever closer: the Highlanders taking on the Chiefs at The Forsyth Barr.

As a student at Otago, you’re obliged to get behind the blue and gold, making yourself part of the ‘Landers Army’. With a promising season ahead, here are some tips to either make you some coin at the TAB or just to make you seem more knowledgeable to your mates.

Waisake Naholo to be the top try-scorer in the competition

The local favourite, “Wai-sake Na-ho-lo”, loves crossing the chalk more than Fekitoa loves a selfie. Top scorer in the 2015 season as the Highlanders reached the promised land with 12 tries, then backing that up with 9 last season; Waisake is a real candidate for white-line fever. Look for the man with the most famous chant in world rugby to be on the end of plenty of outrageous backline moves from the Highlanders this season.

Beauden Barrett to be the top points-scorer

Barrett reached levels last year that New Zealand hasn’t seen from a man in the number 10 jersey since Dan Carter was in his prime. Directing a lethal Hurricanes backline to a trophy-hoist, Barrett finished with 223 points, well clear of next-best Damian McKenzie on 199. Having lured his brother, Jordie, north from Canterbury, the Hurricanes are looming as a serious contender this season. Barrett is their talisman, and with critics vocal about his goal-kicking issues last season, expect him to respond the only way he knows – in style.

The Japanese sunwolves to cause an upset or two

After last year’s rough induction into Super Rugby, the Sunwolves will be hoping to move onwards and upwards this season. Led by Otago’s beloved and adopted Fumiaki Tanaka, expect the men from Japan to come out hissing. They’ll be looking for early blood in Round Two, when they take on the woeful Southern Kings in Singapore. Pencil 4 March in for their first win.

Charlie Ngatai to call it quits

Concussion is a major issue in professional sports, and it is more prominent in rugby than almost any other sport. Ngatai has had major issues with concussion in recent years, having failed to play a game since May 2016, and already appears likely to spend most of this season on the sideline as a result. It would send a strong signal about the issue of concussion to the rugby community all around New Zealand if Ngatai did take a step away from the game.

The Johannesburg Lions to have a repeat performance

The men from South Africa were sensational last season, and left the Landers Army licking our wounds after giving us a serious hiding in the playoffs. They make up the bulk of the South African national team, and are a strong bet to go to the semi-finals or final again, having an easy South African conference to make it out of.

The Blues to make the playoffs

As is clear from the new format, four New Zealand teams can make the playoffs. Hence there is the same debate each year over which team will miss out. My money’s on the Crusaders this year. With the Highlanders, Chiefs and Hurricanes as strong as ever, this ignites the traditional Canterbury-Auckland rivalry. Sonny-Bill will be integral for the improving Blues, and they’ll make the next step forward under Tana Umaga this season.

‘Sops’ to earn big minutes in the black jersey

With Aaron Cruden heading overseas at the end of this season, ‘Shag’ Hansen will likely stick to the same tune he always has in rewarding loyalty. Lima will ride the pine behind Barrett this season, and is likely to see plenty of time closing out games. Hansen will likely continue to shift Barrett to fullback late in the piece, and this will aid Sopoaga’s development.

The tour of the Lions is the centrepiece of this year’s rugby, and they will come up against all of the NZ Super franchises. They will be coming off their long domestic season, and as they gear up for the big dance against the boys in black, there may well be some upsets on offer. Look for at least one of the franchises to knock them off.