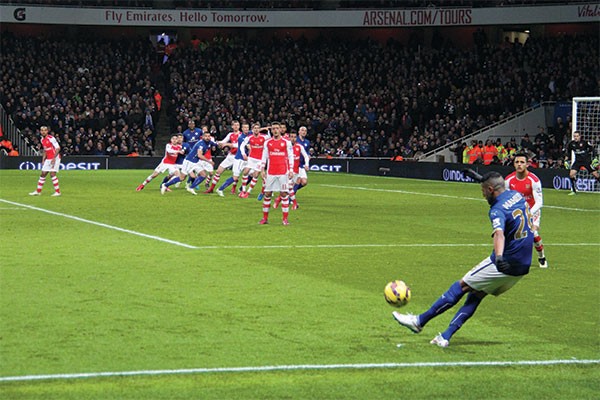 About as Likely as Kim Kardashian taking the Oval Office

In arguably the greatest sporting upset in history, Leicester City have been crowned champions of the English Premier League after Tottenham Hotspur were held to a 2-2 draw by Chelsea, eliminating any chance of them catching the midland side.

The 5000 to one rank outsiders were expected to be fighting a relegation battle but have instead finished at the opposite end of the table. Led by charming Italian manager Claudio Ranieri, Leicester have done the unthinkable, winning their first ever top-flight title in their 132 year history.

Having barely escaped relegation last season, absolutely no one thought that this could happen. If anything, they were favourites to finish in the bottom three and drop out of the Premier League. However, in remarkable circumstances, Leicester beat off competition from big-spending powerhouses Manchester City, Chelsea, Manchester United, Arsenal, and Tottenham.

After the final whistle sounded at Stamford Bridge, confirming Leicester as champions, thousands streamed into the midland city to celebrate the climax of such a magnificent journey.

In a true rags to riches story, many of Leicester’s star players have ascended to the top of English football despite them struggling to make a living in Europe’s lower leagues prior to this season. Jamie Vardy, Leicester’s top scorer with 22 goals, is a former factory worker, and was a non-league footballer less than five years ago.

Likewise, other key players Riyad Mahrez and N’Golo Kante were plying their trade in the second division in France before making their move to Leicester in 2014 and 2015 respectively.

All three players were included in the Professional Footballers Association’s Team of the Year, while Mahrez also picked up the PFA Players’ Player of the Year, given to the player adjudged to have been the best of the year in English football.

The title victory was also the first in a managerial career spanning nearly thirty years for 64-year-old Ranieri, who had formerly managed Chelsea to a second place finish in 2004.

The Italian’s appointment at the start of the season was frowned upon by most pundits, after he had had an appalling spell managing the Greek national team, where they failed to qualify for the European Championships and even lost to the Faroe Islands, one of the worst teams in Europe. Marcus Christenson of The Guardian highlighted Ranieri’s charming personality, but concluded that “If Leicester wanted someone nice, they’ve got him. If they wanted someone to keep them in the Premier League, then they may have gone for the wrong guy”.

But despite all the criticism, Ranieri proved he was the man for the job. He and his side have disproven the modern theory that money buys titles, showing that passion, hard work and team cohesion are still the most important values in football.

Leicester will also make their first appearance in the UEFA Champions League next season, where they could face the likes of Barcelona and Real Madrid. By playing continental football, the Foxes have to the ability to attract quality players, and with such an inspiring story, many would be keen to join the club.

As by tradition, there will be an open-top bus parade through the city of Leicester to celebrate winning the title. It is expected that a large proportion of the 370,000 residents will turn out for the event, arguably the biggest event in the city’s history.

For the Premier League powerhouses, they will ponder what could have been, and reflect on their respective poor seasons. Next season will see the introduction of several of the world’s best managers, which could potentially ignite the most exciting and competitive period in the league’s 24 year history.