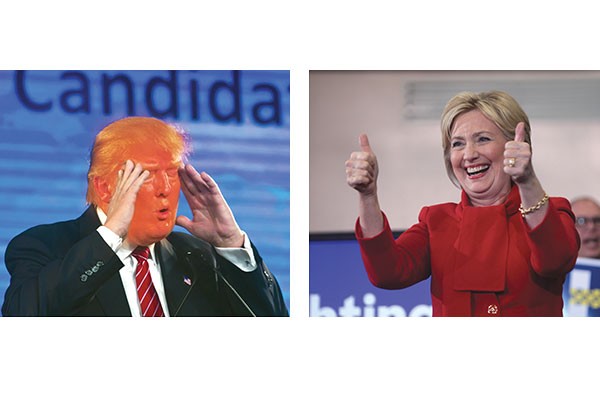 And the nominees are…

The Indiana Primary last week gave the Republican Party one last chance to save themselves from having Donald Trump as their presidential nominee. If they could unite around one candidate, they could prevent him from getting to the magic number of 1237 delegates, and defeat him at a contested convention.

Unfortunately, that plan rested on Ted Cruz, a melted ball of slimy wax about as popular with voters as genital herpes. A decisive victory in Indiana would allow him to fight on to California. Without it, his campaign was dead in the water. Unfortunately, the voters that could have saved his chances decided instead to hand him an embarrassing beatdown, by a margin of 53%-36%. In this shitshow of an election, the racist giant douche defeated the homophobic turd sandwich.

Before the results were even fully counted, Cruz dropped out of the race, conceding that he had no viable chance of stopping the Trump train on its course to the nomination. Kasich dropped out shortly after.

On the Democratic side the race has been effectively over for several weeks now. Even as Sanders picks up an upset win in Indiana, he remains 321 delegates behind with no realistic way to pull them back. At this point, he would need over 65% of the vote in every remaining state to catch up. His campaign has been peddling the narrative lately that he can still win by converting superdelegates at the convention, but the chances of that happening are even smaller. Not only would the superdelegates be going against their personal loyalties to the Clintons, but they would be over-riding the will of the voters, something they have never done and have no reason to do now.

As of Tuesday last week, both parties have their nominees. Donald J Trump, and Hillary Rodham Clinton. They go into the general election with the nefarious honour of being the most disliked party nominees in history. Clinton currently has a 39% unfavourable rating, while Trump clocks in at 54%. With two heavily splintered parties going into the general, this campaign is going to be a street brawl. Both candidates are going to be focusing heavily on negative campaigning, making the case that regardless what the voters think of them, the other guy is worse.

Gone are the days of the aspirational, high-minded movements of Obama and the collegial passion of John McCain, this is going to be dirty politics at its best. When the story of this election is told, it won’t be an Aaron Sorkin movie, this will be pure Tarantino. And I for one, can’t wait.