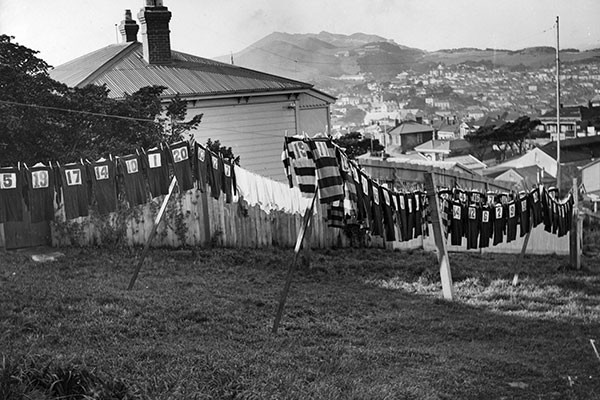 The speculation from armchair critics is now over, and our 31-man All Blacks squad to defend the World Cup has been finalised.

The squad balance suggests that the All Blacks will continue their open and attacking style of play — expect “spinning it wide” to try and scores in multiples of five.

The talent we have in the wider squad means that several worthy players will have to follow the tournament on Sky like the rest of us peasants. However, they shouldn’t crack into the beersies yet. They will need to have their passport ready and bags packed in case there is a similar crisis to when Stephen Donald was called back from a fishing trip to kick the winning goal of the 2011 World Cup final.

This is the grim reality facing Lima Sopoaga. Having improved dramatically over the last few seasons, culminating in a Super Rugby title with the Highlanders and handling the pressure of an All Blacks debut against the Springboks in South Africa, it could be argued that Sopoaga’s exclusion is the biggest surprise in the squad announcement.

Dan Carter is locked in as the starting No. 10 with experienced All Blacks Beauden Barrett and Colin Slade as backup playmakers. Slade and Barrett’s versatility just edged them ahead; they can both cover at fullback and on the wing if need be. Focus on 2019, “Sops”.

Another surprising omission is Israel Dagg, which debunks the notion that you can’t play your way out of the All Blacks. This also seems to be the case with Cory Jane. But it’s not so surprising given his injury-disrupted season.

This leaves Highlanders captain Ben Smith as the only proper fullback in the squad. Smith is an 80-minute man every week. The All Blacks have put a lot of faith on Smith continuing this record in England, and the selection of the outside backs suggests that Smith will not be used on the wing as he has been in the past.

Alongside Barrett and Slade as fullback options is Hurricanes winger/fullback Nehe-Milner Skudder, who scored twice on debut against Australia and will be crucial to the attacking game plan of an exciting backline that includes his Hurricanes teammate, Julian Savea.

Arguably the most exciting player of the Super Rugby season was the top try scorer Waisake Naholo, and arguably one of the biggest shock inclusions. There is no questioning Naholo’s talent and pace, but his match-fitness will be a concern as he is still recovering from the leg fracture he suffered on his All Blacks debut against Argentina. The All Blacks doctors must be confident that he will be fully fit, and he is likely to miss the first couple of pool matches.

Charles Piutau is fit and has been playing well, so he will consider himself very unlucky to have missed out to make way for Naholo. Piutau may be regretting his decision to sign with Irish club Ulster for next season, which was a factor in his exclusion — Steve Hansen was frank about players being disloyal to the black jersey (although this hasn’t affected Colin Slade’s selection in the squad).

No surprises in the midfield with Ma’a Nonu and Conrad Smith the obvious 12 and 13 combination and plenty of support from SBW and Malakai Fekitoa to add impact from the bench. Aaron Smith is the undisputed first-choice halfback, and the inclusion of TJ Perenara as backup was never in doubt.

Andy Ellis will be feeling hard done by. The Crusaders halfback was brought back into the All Blacks for the Samoa and Argentina tests after four years out of the black jersey, only to be dropped for Tawera Kerr-Barlow. However, like Faumuina and Naholo, Kerr-Barlow was identified by the selectors a few years ago as part of the next generation of All Blacks; his selection is in keeping with Hansen’s policy of keeping faith in injured but promising young talent.

No great surprises in the forward pack, with the captain Richie McCaw and his Crusaders teammates dominating selection up front. Liam Messam is a deserved pick, having narrowly missed out on the 2011 squad.

The inclusion of Blues prop Charlie Faumuina was the biggest eyebrow raiser in the front row. He was injured for a lot of the Super Rugby season and hasn’t played a test match since the All Blacks beat Wales in Cardiff in November 2014. Faumuina’s inclusion meant there was no room for Nepo Laulala, who looked as though he was being given a huge push to prepare for the World Cup after debuting against Samoa in July and playing another three tests since. Like Sopoaga, he will be looking forward to 2019.

An exciting, experienced team of 1484 test caps and an average age of 28 that has the difficult “squad goal” of becoming the first team to retain the World Cup. On paper, they can achieve this.