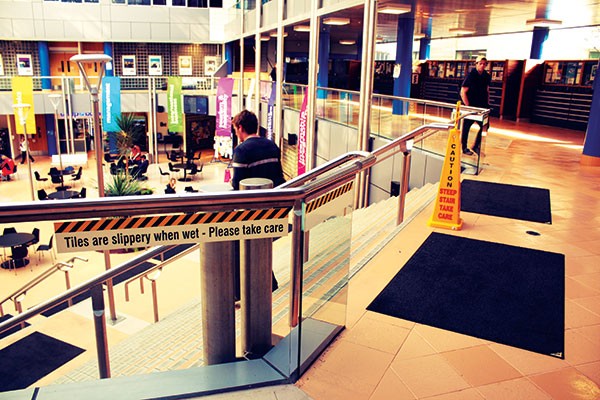 The University of Otago must pay $60,000 to a woman left permanently disabled after slipping on tiling in the Commerce Building.

In June 2013 Katherine Casey fractured her spine and pelvis in three places after slipping on the building’s tiles.

Casey later sued the university and it pleaded guilty to a breach of section 49 of the Health and Safety in Employment Act 1992. Following negotiations at court last week, Casey’s lawyer and the university negotiated reparations of $60,000, which must be paid by 7 September.

The victim’s sister, Victoria Casey, is acting as Katherine’s lawyer and said Katherine was “a very active tramper” before her injury — “she and her husband did about three or four different walks a year”.

Casey said her sister also enjoyed cycling and kayaking, “but now, that is all finished now”.

“Accidents happen and people lose their lifestyle, but when it happens because of such deliberate failure to fix a known hazard, I think the anger and frustration there is quite high”, said Casey.

John Patrick, the University of Otago’s chief operating officer, said the university is “sorry for any injuries that occur on its campus” and “deeply regrets” Katherine Casey’s injuries.

“The university tries very hard to make the campus safe for its students, its staff and the public. It is clear that in the case of the Commerce Building it failed,” said Patrick.

Victoria Casey said after the injuries she sustained, Katherine and her husband made an Official Information Act request “for all records of reported injuries” in the building.

Casey said the documents showed around 70 formal incident reports and complaints since the building was established in 1992. There were 25 specifically related to wet tiles. “Of those, at least a dozen were serious injuries and required hospitalisations.”

The complaints include broken and dislocated arms, a sprained ankle, a broken finger, a fractured jaw and broken teeth.

In 1998 a person slipped on the steps of the building and was taken to hospital with knee, thigh and lower leg injuries. The same year a second individual injured their spine in the building.

In 2001 an individual tore their liver, and in 2010 a nine-year-old child slipped and was knocked unconscious.

OUSA President Paul Hunt said OUSA is “concerned with the safety risk” the building poses to students. “It is an issue that we’ve raised numerous times in the past.”

Hunt said students with concerns or complaints about the building or any other area of the University should contact OUSA.

Patrick said that a “major refit of the building has been under consideration for a number of years and planning has recently been completed”.

Since the accident, the University has sought a covering for the tiles which was applied to levels two and three of the building over the summer of 2013/2014.

The upcoming refit will enlarge the building’s atrium, replace the atrium roof and create a new entrance from Union Street. The refit will also modify or replace the stairs.

Patrick said the estimated timeline “is for design to be completed in April 2016, with construction work expected to commence in mid-2016 with completion in mid-2017”.