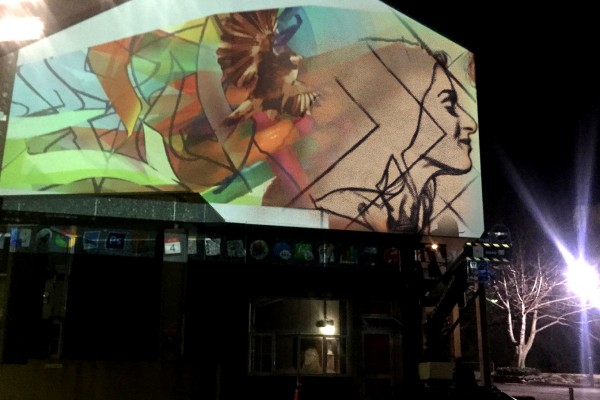 The work on a campus mural has begun. In collaboration with the University of Otago, OUSA has commissioned Canadian artist, Fluke, to work on a street art piece located on the outside of the Castle Lecture Theatres.

The work began on Tuesday 5 August, as part of a campus “beautification project” initiated in 2013.

OUSA is contributing approximately $4500, and the university has contributed $13,000. The Dunedin Street Art Trust have provided assistance with the project too, as well as some local businesses, including Accesssman and Gordon Harris Paints.

Fluke was chosen from a list of over 20 international artists, following “a voting system amongst OUSA staff and executives”.

“He was chosen for his expertise on large-scale street art, and his aesthetics. His collective, A’Shop, is world renowned, and bringing him to Dunedin to collaborate on this project opens doors for local and national artists.” A’Shop, which includes eight artists based in Montreal,  has worked on almost 100 pieces over the last five years.

Fluke produced the initial design but says it has had “many modifications” to ensure it reflects the student atmosphere and remains culturally sensitive. “It’s a back and forth process,” says Fluke.

Hendra says the mural will “encompass traditional Māori symbolism to tell a story honouring the history of Dunedin city and the University of Otago”.

“Further inspiration for the design is the hongi, the act of sharing breath with another. The image represents shared breath and knowledge, as well as the commitment of treating a visitor as one of your own.”

Vice-Chancellor Harlene Hayne said the project will “showcase our campus as a vibrant, dynamic and creative space for students, staff and visitors. It will also build upon our already strong bond with Dunedin city.”

Hendra said the mural “builds upon our first commission piece in 2013 by Sean Duffel, who has now become well known across New Zealand”. Duffel’s piece is located on Ethel Benjamin Place next to the Student Support Centre.

Hendra adds, “Dunedin is a modern city that proudly respects its history, one that understands and honours its past and carries that pride forward into the future.”

“By employing dual styles of paint work, both a modern graffiti style and traditional brush work, the act of painting this art piece also emphasises the coming together of the traditional and the contemporary.”

Aside from the design, Fluke says the weather, “which is a huge challenge”, and the campus traffic have added to complications.  “But it’s very similar to what we’d experience in a street art festival. It’s almost as a live performance, so students can actually witness it.”

Spectators are encouraged to watch Fluke and his colleague, Talia Carin, complete the work over the next two weeks.