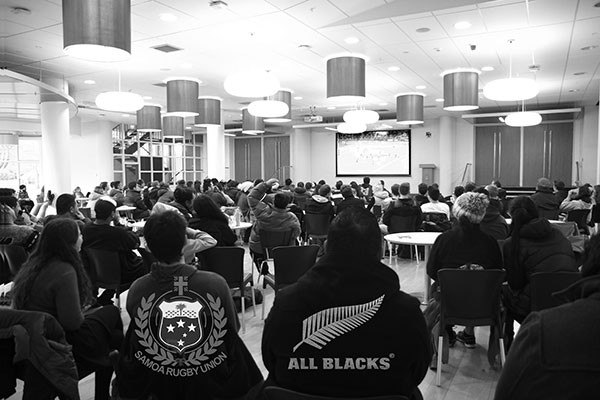 Lecturers Cancel Classes to Watch Test, Blame It on Snow and Ice

Last week saw a rare doubleheader of big rugby matches with the first ever All Blacks test match in Samoa and then the State of Origin series decider in Brisbane. These two games showed how two very different rivalries can play out. The State of Origin players and fans seem to want to hurt each other, whereas with the All Blacks and Samoans it looked like it could be the start of some serious bromances as both teams took part in a pre-match parade through Apia and all the supporters came together in a week-long cultural celebration.

It was such a big occasion that hundreds of students gathered around the big screen in the Union Hall to watch the All Blacks’ history-making visit to Samoa, with the game ending in a 25–16 win for the ABs after a predictably rusty performance in the hot, dry conditions. Samoa were visibly pumped up and really put themselves physically into the game, but the lack of preparation time was evident for both teams as neither side managed much fluidity throughout the game. Samoa put up a good fight throughout and were never out of the game, but they missed a few important goals. In the end, the boot of Dan Carter proved the difference as he kicked 20 points and set up the All Blacks’ only try when his cross-field kick found George Moala. Carter has played himself back into form at the perfect time after a difficult start to the season and looks very confident as the All Blacks’ first choice number 10 going into the World Cup.

Plenty of improvement is still needed but, with only four games before the All Blacks’ first match of the World Cup, there is not a lot of game time to prepare. The addition of the Highlanders and Hurricanes players into the team will see the All Blacks at full strength for their Rugby Championship games but brings with it a number of selection problems — we could probably field two completely different teams capable of winning the World Cup.

The one-off test in Apia was a prime example of the game returning to its roots and becoming more than just a test match — it really was a cultural milestone for Samoa. So much so that even Prime Minister John Key was in attendance but, as he does whenever he is anywhere near a rugby game, he managed to make a mess of yet another high-profile, post-game handshake.

All Blacks coach Steve Hansen was recognised as an honorary chief for his role in making this test match a possibility. It was an honour that was accepted by the notoriously monotone and poker-faced All Blacks coach, who was optimistic about these types of test matches in the Pacific becoming more common.

With the millions of dollars of investment that was needed to get Apia Park up to international test standard, hopefully a regular schedule of games can be worked out to make use of the updated venue. Surely New Zealand, Australia and South Africa can commit to playing at least one test per year in Samoa, Tonga and Fiji or even open up an expanded Rugby Championship to the Pacific nations. This trip to Samoa was a reminder of how important the Pacific Island nations are to the success of New Zealand rugby; many current and former All Blacks were able to reflect on their Samoan heritage. Current All Blacks who could have represented Samoa include Sonny Bill Williams, Julian Savea, Ma’a Nonu and Keven Mealamu.

So the All Blacks eventually got the job done on the field, but the sense of occasion surrounding this test match made the actual game and the result far less significant than the prospect of regular test rugby in the Pacific. Commercially, it would have made much more sense to host Samoa at Eden Park, which would have been more profitable than the relatively small crowd at Apia Park. Thankfully, the accountants were overruled for once and this trip was a return to the pre-professional era of rugby that many of us have forgotten or never even known.