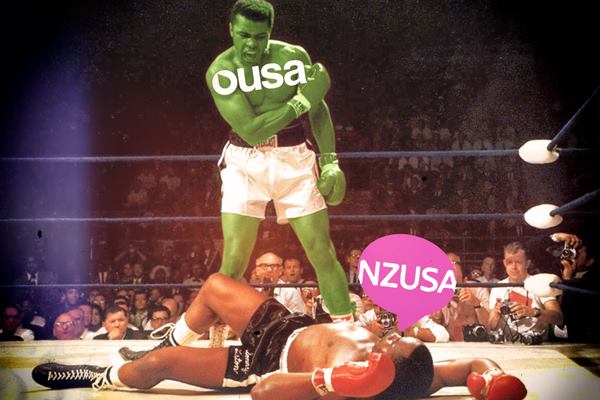 “Even if membership were free, I’d have serious questions about being a member.”

In 2013, 86.39 per cent of Otago students voted in favour of continued NZUSA membership at the OUSA referendum.

At the OUSA Executive meeting, held today, Acting OUSA President Ryan Edgar said that he and fellow Executive members have looked into the value of the membership “fairly extensively.” He said, “Both years that I’ve been here, we’ve had criticism about not being politically active. We’ve delegated that responsibility to NZUSA and for the money we pay, we probably should have.”

The University of Otago has never agreed to provide funding for NZUSA since the introduction of the Service Level Agreement between OUSA and the University. Membership costs OUSA $45,000 each year and a further $5,000 is allocated towards travelling to NZUSA conferences.

NZUSA President Daniel Haines was “caught by surprise” after hearing the decision today. Haines defended the union explaining that, in three years, membership has reduced from $80,000 per year to $45,000 per year due to increased external funding and support.

Education Officer Laura Harris said, “there is potential for the body that NZUSA represents - for having a central body.” However, she added, “A lot of their communication has been about asking for money and then asking us to provide the information. We can’t pay for something and then provide the service too.”

Haines defended NZUSA, explaining that “[former OUSA President Ruby Sycamore-Smith] never communicated any issues about NZUSA with us. If they had communicated with us, we could have addressed it.”

“I don’t understand. The whole point of our existence is to have associations communicate the issues to us and each other.”

“It’s hard for us to do our job if [the associations] won’t talk to us.”

Postgraduate Officer Kurt Purdon said, “they’ve had every opportunity to prove themselves each year. With elections happening, this was their year. Instead, Ruby [Sycamore-Smith] single handily did more than their entire body in terms of representing students.”

“We lose credibility by being a part of them. Even if membership were free, I’d have serious questions about being a member.”

In previous meetings, the Executive have outlined reasons for staying with NZUSA. The main argument for staying, aside from having a centralised student body to approach politicians, has been that university associations have an obligation to support other associations who do not have as much lobbying power. NZUSA also provides some training to incoming student association presidents.

Haines said, “it concerns me that this decision will diminish the collective power of NZUSA.”

“It will be harder to do things without a united front. I am concerned how we will look to politicians if we approach them as separate parties. No one wants to talk to twelve different people when they could talk to one.”

At the Executive meeting, Edgar said, “They’ve projected $450,000 of overheads next year.” He explained that if NZUSA were to cease to exist, “all of a sudden you’ve got this massive accumulation of wealth.”

Finance Officer and 2015 President Paul Hunt has previously said he is “a fan of devolution.” He has noticed more students becoming involved in politically active cause groups and would “rather support these smaller groups than move funds upwards.”

Harris suggested organising meetings between student association presidents and paying “someone with the relevant experience” to “motivate and band the groups together.”

According to NZUSA constitution, OUSA is required to give 12 months notice prior to withdrawing. However, they are yet to confirm whether they will be paying the $45,000 for 2015.

The Executive said that as a result of their withdrawal from NZUSA, they would look into ways of further supporting Otago Polytechnic Students’ Association.
Posted 6:51pm Thursday 27th November 2014 by Josie Cochrane.