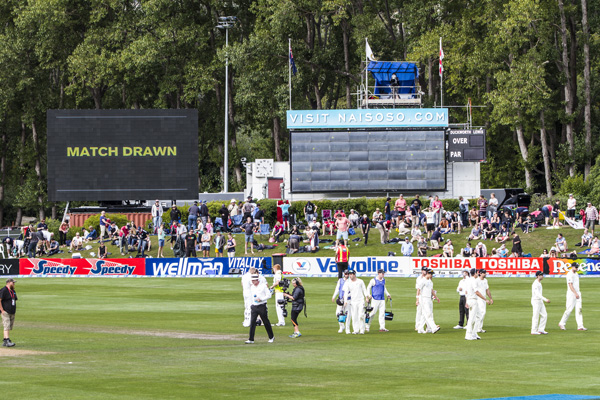 The first Test Match between New Zealand and England at the University Oval ended in a dour draw. Day one was rained out and while England’s batsmen made a valiant effort to set up a result by throwing their wickets away on day two, their sacrifices were to no avail.

New Zealand fans could have been forgiven for feeling optimistic heading into day four with the match in a position where only New Zealand could win. Alas, the previous two days of New Zealand dominance had only conspired to set up the most dogged of England rear-guard actions. England are a team stacked with sensible, conservative batsmen who pride themselves on calmly repelling even the most vigorous bowling attack at their own languid pace. This was their time to shine.

Alastair Cook is the stern librarian of international cricket. At any sign of unrest, stress or raised voices he simply purses his public school lips, takes a deep breath and sets about calmly taking control of the mayhem. Never hurried, always serene, on day four Cook and his right-handed facsimile Nick Compton painstakingly dragged England back to parity with an opening stand of 231, erasing most of the lead New Zealand had built in the previous two days. The pair ground the New Zealand bowlers into the dust and the crowd into a vegetative state with a look of bored disdain. Even Tommy Cooper’s incessant trumpeting took on the tone of a balloon deflating as the hours wore on.

It quickly became clear that England’s first innings was an aberration. The pitch was dead flat. Geoffrey Boycott was heard to note in the commentary box that his “grandma could bat all week using a knife and fork on this pitch.” Four days was never going to be long enough to win this one.

In New Zealand’s first innings, local lad Hamish Rutherford had blazed 171 on debut to put New Zealand in a commanding position with a lead of almost 300. From there it was the job of New Zealand’s seam bowlers to bowl out England in five sessions to force a win. Unfortunately, with no pressure to score quickly, Cook, Compton and co were able to set up camp in the middle and see off the remaining 170 overs. New Zealand’s most energetic bowler Neil Wagner tried to drag New Zealand to victory with pure determination. His shouting, stomping and snorting, though ultimately futile, were nonetheless a sight to behold.