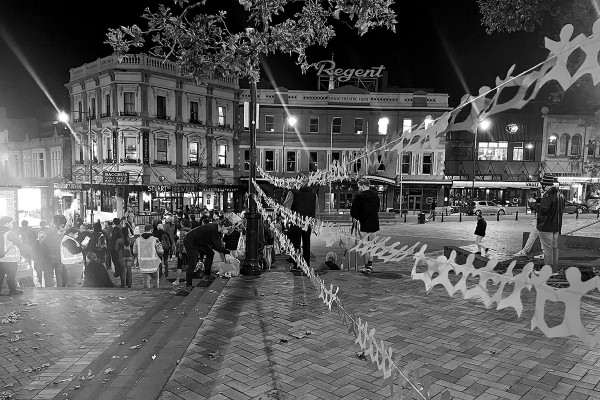 “Hopefully we don’t have to have too many more of these.”

A candle-lit vigil was held in the lower Octagon to commemorate the innocent victims killed in Ukraine by the Russian military. Around 60 people were present at the event, with attendees expressing a mixture of sadness, anger and fatigue over the ongoing, violent war.

As of May 5, two months into the Russian invasion of Ukraine, the United Nations estimates 3,238 civilians have been killed, including at least 227 children. The country has been under relentless bombardment from that time, with around 10 million Ukrainians displaced from their homes, and almost 6 million forced to flee the country.

The vigil, which was held on Thursday April 28, was a solemn one. Lines of paper dolls were strung up around the Octagon, with each doll representing one civilian casualty. A sign beside it read: “There are not enough dolls [to represent the number of victims]”. A hush fell over the Octagon as the victims were remembered with a minute of silence. This was followed by a haunting cello piece, a poem and a number of speeches.

“From the very beginning it has been a genocide of Ukrainians,” said Olha Viazenko, a Ukrainian national who has family facing war conditions in Ukraine. Olha told Critic Te Arohi that Ukrainians have been subject to brutal war crimes and abhorrent violence, from “civilians who were shot in the head with their hands tied behind their backs,” to “girls [as young as] 9 who have been raped by Russian soldiers.” Despite the overwhelming media reporting on the Ukrainian crisis, facts have been challenging to establish, with the difficulty of reporting from war zones compounded by a relentless propaganda push from Russia aiming to stoke apathy and uncertainty, especially on online platforms. For his part, Russian President Vladimir Putin has declared that any evidence of war crimes is fake news, while pressuring and arresting Russian journalists and activists who do not adhere to the official version of events.

Olha’s response was simple: “Putin will not stop with Ukraine, so we have to stop him.”

Dunedin’s Mayor Aaron Hawkins told the crowd that: “In some ways it feels token to be standing here while we’re on the other side of the world. But it is important that we do what we can, and use the avenues that we currently have, to put pressure on our diplomatic core locally and internationally. [We want to] try to get to a peaceful resolution to what is a very ugly situation,” he said, adding, “Hopefully we don’t have to have too many more of these.”

One student said that “we are privileged to experience freedom and humanity here.” Another agreed that people in Aotearoa were lucky in this respect: “The only difference between us and [the Ukrainians] is just the privilege of not living next to Russia.”

For any students wanting to support Ukrainian resistance and solidarity, a vigil will take place every Saturday at 12pm in the Octagon. Any students willing and able to provide financial support can also do so, with international organisations like the Red Cross, World Vision and UNICEF, as well as Ukrainian charities like Voices of Children and Sunflower of Peace.