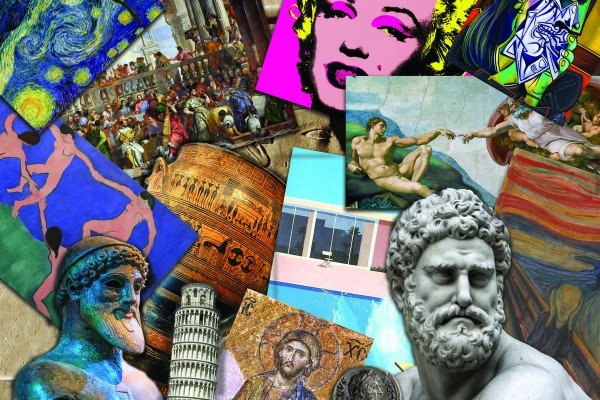 If you can’t jump into paintings, that’s embarrassing for you. I do it all the time. One day, my hubris will get the better of me and I will be trapped in one forever. If I get to choose which painting that is, it’ll be one of these. I’ve excluded any landscape paintings of Dunedin, because we’re all trapped here already. 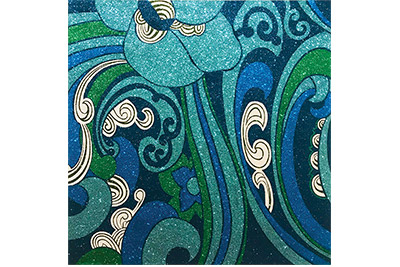 This piece is sparkly, magical, and begging to be licked when the curators aren’t looking. Being trapped inside of this painting would be like horfing nangs with Grace the Rainbow Magic glitter fairy. So many art galleries are overburdened with portraits of sad, rich, inbred men. In contrast ‘I’ll Give You a Kingdom in that House on that Hill’ is just crazy beautiful fun. Isn’t “glitterdust” the most ethereal medium you’ve ever heard? It’s a disco on canvas, and I’m ready to party.

Paterson is also the creator of Aotearoa’s most iconic structure: the gigantic plastic golden chicken wing outside of Massey University’s Albany campus. It’s called ‘The Golden Promise’, and it’s crucial that you Google it if you can’t make the pilgrimage to kiss tender plastic pseudo-meat exterior.

Whoopsie, my weiner is out! This handstanding peepee man isn’t a painting, and you can interpret “trapped inside” however you wish. He’s a bit of a prankster and would always be a hoot at parties. Everybody goes crazy when he does his nudie handstand trick, schlong flopping about all over the place. When science can bring statues to life, this guy is coming home with me. 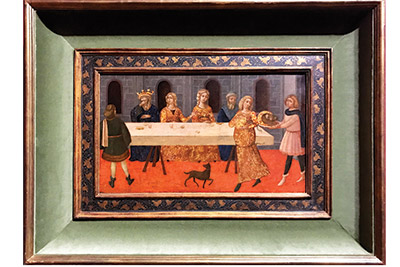 As a birthday treat, Mum’s cooked your favourite meal: decapitated head. Score! I wish that I could attend this party. There are heaps of smokin’ hot babes and a cute little doggy as well. King Herod on the left is facepalming, but the vibes are tight and it’s all in good jest. He’s like, “did you seriously decapitate John the Baptist and serve him on a platter against your better judgement? Man, you guys are crazy, haha. Who wants some cocaine?”

Look at this child’s smug face. This is the younger cousin in sitcoms who shaves your cat and blames it on you. “It wasn’t me, it was cousin Edmund!” you protest. The parents shake their heads and sigh. “Cousin Edmund is a sweet angel cherub. He would never do such a thing.” Cousin Edmund weeps crocodile tears while the adults coddle and coo, glaring at you disapprovingly. When they’re not looking, cousin Edmund smirks in the background and sets the carpet on fire.

Interdimensional art-hopping youth protection law decrees that it’s totally legal to punch a child if they’re really asking for it. I wish that I could Super Mario 64 into this painting and biff the smarmy grin straight off this little bastard, but I bet he’s probably wearing a second, smaller, smarmier smile underneath. 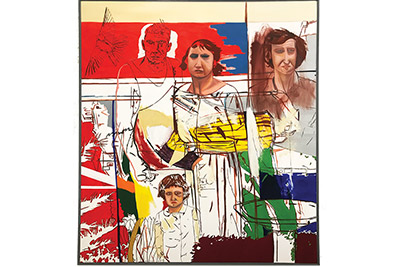 Uhh … woah, man. You feeling okay? Everybody in this picture needs CBT. I’m talking about cognitive behavioural therapy, not cock and ball torture, although that’d probably get them to loosen up a bit as well. We’d sit around in a circle, practising mindfulness while using “I” statements. For example, “I” feel deeply uncomfortable when looking at this painting and “I” want to fix whatever mental torment they’re burdened with, by any means necessary.

6. Preparations for the Market, Quimperlé, Brittany (1883) 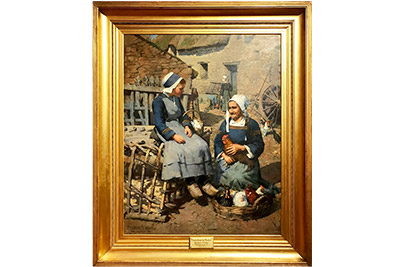 Farmers markets are trendy and cool. The ladies in this painting are ahead of their time. They look fresh to death in their clogs and bonnets, and Meredith on the right has even brought her pet chickens along for a jaunt. Together we will partake in kombucha and a halloumi bagel, then afterwards, post our cutest snaps on Instagram with the Lark filter. Saturday (mornings) are for the girls. #eatlocal #organic #farmtotable #girlpower

Oil on canvas laid on hardboard 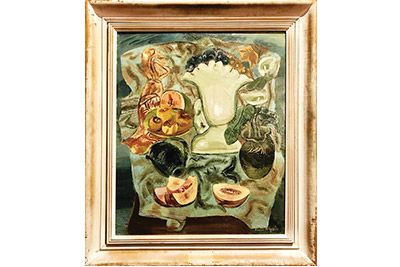 I thought this was a painting of innards, but it’s actually fruit. The things on the bottom are papaya, I think, which I’ve never tried before, so I’d like to give them a go. Everything else looks a bit gross. There are some mouldy old apples and a vase — possibly full of offal. I really think that this painting is horrible. The artist’s other paintings are nice enough but I really want to enter this one just to figure out what the fuck is going on. The fruits are revolting. Frances Hodgkins is why I get my vitamin C solely from honeydew flavoured vape juice.

Another strong contender by Hodgkins is another piece entitled ‘Ibiza Harbour’. I’m torn. I want to go to Ibiza, because I love the Vengaboys song, but like ‘Still Life with Fruit Dishes’, it’s the most repulsive depiction you’ve ever seen. 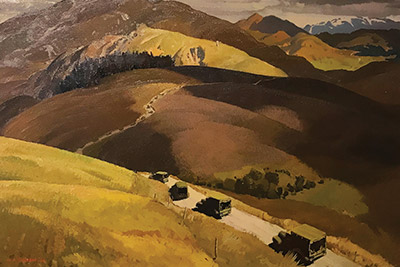 Something about sitting on a hill fills me with simple delight. Sometimes I look out at Mt Cargill and am filled with longing, wishing that I could be lying in a paddock under the big open sky. This is actually a wartime piece, and you can see a convoy of military trucks trooping across the Canterbury hills. This is fine because I’m a woman and wouldn’t have been drafted.

I’d be employed in a factory, self-sufficient on my own income for the first time in history, wearing sexy tradie overalls and indulging in illicit affairs with lonely wartime widows. My lesbian lover and I would build a cottage in these hills. We’d own milk cows and sheep, and we’d never see a man ever again. We would adopt a cat and laugh at the rumours that the village folk make up about us. We would die of old age and be buried together in eternal embrace. History would remember us as great friends.

Eros, Greek god of love and sex, could teach us all a thing or two. Imagine the positions you could accomplish when wings are involved. You’ve heard of reverse cowgirl, get ready for inverted upside-down cowgirl. Powerful pelvic floor muscles are required, so do your kegels.

Lewdness aside, it’s a gorgeous painting. It’s done by a man whose name is so good that he used it twice.

Gouache and pencil on paper 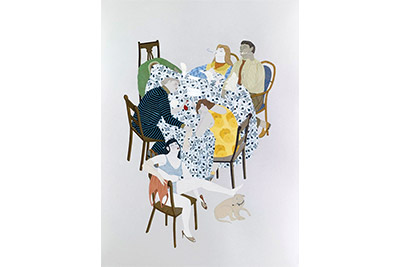 I interpret this as a group of incredibly dusty flatmates on a Sunday morning. They feel like death, but it’s Kelsey’s red card, so they’re trying their best to get glammed up and make some decorations out of refill paper. The desaturated tonal values represent their internal languor, yet the subjects display commendable strength as they gear up for the sesh nonetheless. Bush’s blend of historic and contemporary styles shows us that this hungover scene is a ubiquitous one. There is a dog. 10/10.