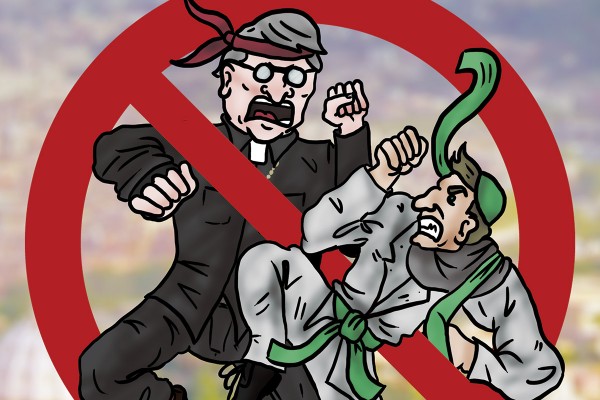 Indoctrinating Myself With Life FM

How listening to Christian radio during O Week saved my life and, more importantly, my soul

FM Radio is like your mate’s parents who you didn’t realise are quite Christian until you started talking about strip clubs in front of them: easy to get along with until Jesus enters the picture. For a bit of a project in O Week, I forced myself to listen to our country’s most esteemed Christian youth radio station, Life FM.

You probably know Life FM as ‘the radio station you find on a road trip and think is just highly average music until they start talking about God.’ It is owned by the enormous Rhema Media, who run most of NZ’s major Christian media sources, including Shine TV, Rhema Radio and Star Radio. They play clean Christian Music, constantly promote related Christian groups, and play recordings of inspiring sermons from American preachers. The station has a wider range than a second year’s Tinder settings after a dry spell, and can be picked up in places like Huntly where no other FM station is available.

As an experiment, I decided to listen to Life FM any time during the week that I would usually listen to music. This usually meant listening to the radio in my room by myself, because there was a lot of pushback when I tried to play it around the flat. I made a few unsuccessful attempts to put it on in my flatmate’s car. He tolerated one song but, because he is a heathen, would not listen to the sermons with me. I was too much of a coward to try and put it on at parties.

I tuned in to Life FM for the first time. They were playing a pop song, which sounded vaguely familiar because it was so generic. It was a four-chord piano song called ‘Healing,’ by Riley Clemmings. She is a bootleg Kelly Clarkson, without the singing ability. One of the best lyrics I could find was “I couldn’t piece me back together with some bandaids and a roll of tape.”

The DJs started talking once the song was over. They pushed their donation drive and discussed an inspiring reading, while the Marvel Avengers theme music played in the background for no apparent reason. They then asked for a $500 donation to their station because they are struggling to reach their fundraising target. Whenever people made donations they gave a shout-out to the donor and made a mini-sermon about Life FM and why donating is essential to further spread the word of the Lord. People are actually donating their money so that this station can play bad Christian pop music.

Next up was the Christian equivalent of Six60, who are named Equippers Worship and, somehow, a lot worse than Six60. Their song was called ‘Holy Fire,’ which explained why my ears were burning.

The DJs started to promote a Sunday night discussion of “as someone of faith is it okay to take up Judo, Kung Fu, Muay Thai, or even Yoga?” I had no idea this was an issue for Christians. In particular, the suggestion that Yoga is more extreme than combat martial arts shook me to my core.

I missed the live talk but the discussion on the Life FM Facebook page shows two sides to the argument. One side argued that self-improvement should be achieved only by meditation on Holy scriptures, so any martial arts with a spiritual element to them should be ruled out, as well as anything generally ‘Eastern’ (yes, there was a lot of casual xenophobia). The other side thought that these forms of exercise were okay, because discipline over the mind and body could be separated from spiritual beliefs. I’m probably missing some nuanced religious ideas here, but Kung-Fu movies are fun to watch.

Christian music is the shadow-realm of ordinary top-40 radio pop. There is an artist called Lacrae who sounds like Post Malone if he didn’t have tattoos and cut his hair. There is Angie Rose who is the same as Cardi B without any mention of wet-ass pussies, or any sex at all. The station even played a ‘90s throwback with a group called Newsboys who sound like what would happen if the male Critic reporters formed an Oasis cover band.

Life FM sounds like a normal radio station, until the casual Jesus-mentions pop out, and you realise that something is off. Their strategy must be to trick people into listening and then suddenly convert them with one of the frequent sermons they put on the channel. I doubted that would ever work.

There are three DJs on the morning wake-up show. Two of them are boring but Bjorn comes off a little cynical. Sometimes he cracks a joke and the other two have to rein him in because he has crossed the line.

The DJs started claiming, in their constant appeals for donations, that the station is supported solely by listeners. I don’t know how true this is, because they advertised Life FM Partners (a Christian-focused accountant) on the station. There is also an organisation called Liberty Trust who give interest-free loans to Christians who agree to become lifetime contributors to their scheme.

The music was starting to get to me. I found it land and emotionless. Even though pop music is usually commercial and produced by a team of 50 people, at least the artists have a personality. These songs were designed by church groups in a lab to appeal to no one and everyone at the same time.

I have started looking forward to the sermons and the shit radio banter because at least they give me relief from the bullshit artificial music. Sometimes I even found myself chuckling at a comment from Bjorn. I did not know how much more I could take.

“If you donate $365 dollars you can go into the draw to win a red Life FM bucccckkkket haaaat!!!” the DJ screamed. Deal of the century.

The music started getting worse. They played a song called ‘Millionaire (Good Like That)’ which describes a guy becoming a millionaire because of God.

In better news, one of the sermons really touched me. It was by an American preacher about about kindness, and turning to God to seek forgiveness. I’ve always been against organised religion but maybe I’ve been too close-minded about the whole thing.

“In Western countries we find it hard to believe that people in poorer countries can be happy,” said some pastor in the middle of a blur of sermons. The comment struck me as weird but his voice was compelling.

I’m definitely coming around to the argument that God exists. These people on Life FM talk about him all the time. If he didn’t exist all these people on Life FM would have to be making it up. That would be ridiculous. It is easier to believe that God exists than that all these people are caught up in some massive conspiracy. That would be fucked up. The Life FM DJs all seem like nice, honest people.

“Life FM helps me stay in a better mindset. I know the station and music will always be clean,” says Bernadette, a fellow Life FM listener.

Life FM taught me that the way I saw the world before was sinful and wrong. I need to change the people I associate with because they are leading me away from a path of righteousness and towards sin. I’m grateful that a radio station like Life FM exists. It carries the love of Jesus through the airways. I’m going to donate to Life FM so that I can be a part of the ministry and help lead others to salvation.

Psalm 46, verse 1: “God is our refuge and strength, an ever-present help in trouble … ”

Life FM is not about the music, it is about loving Jesus Christ our Lord and Saviour. It is essential for any student at Otago to invite the Lord into their daily lives. Life FM should be the only choice of radio for students at Otago. It deals with good, spiritually rich topics.

Under the corrupting influence of normal radio stations such as Radio One and The Rock, I was led to a path of sin. Attending Church and freeing your mind from the unspiritual ideas spread by the non-Christian media is essential to being raised by the Lord on the day of judgement. I will reject Kung-Fu films to better follow the example set by Jesus Christ our Lord and Saviour.

Thank you Life FM, you have shown me a path to forgiveness, and saved my soul from eternal damnation.