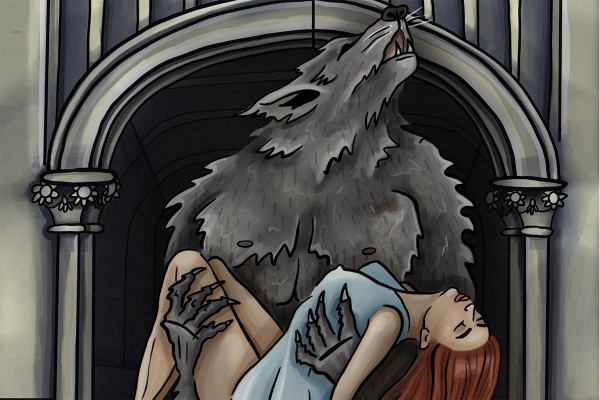 Scary Stories to Tell in the Dorm: Investigating Campus Superstitions

Otago University is the mysterious old crone of tertiary education. Many spooky stories lie within her walls. She squats in her rocking chair and cackles ominously, regaling dementia-ridden urban legends and superstitions to gossipy students who love a bit of tea. Superstitions are beliefs that aren’t founded upon any scientific evidence, and most of us have them. Maybe you think that four leaf clovers bring you luck, or that Leo boys will break your heart (true), or that watching anime in intermediate school wouldn’t turn you into a loser with no friends (untrue). Either way, the university has a whole lot of ghastly tales it has collected over the years. Toss your $40 lab coats into the bin and join Critic as we traverse the astral plane, investigating our campus folklore.

When I was a horrible little nerd getting swirlies and doing Hands-On at Otago, a campus guide once told me a secret about the wooden archway on Union Lawn. “If you run through the right way,” she whispered, “you’ll have limitless IQ points and pass all of your exams. If you run through the wrong way, you’ll fail.” I opened my mouth to ask more, but it was too late. She disappeared in a plume of smoke.

This haunted me. Which way was the good way? I put it to the test. I sprinted through the archway and out the other side. Great job: I got C’s that year. I needed to remedy this and I definitely wasn’t going to study, so I gave it another shot. Not to flex but I proceeded to get straight A+’s and nod wisely along to Rick and Morty. The bad news is, I forgot what the good way is. You can give it a go — if you’re willing to risk it all.

Holy shit. There are secret bunkers underneath the Geology and Archway buildings.

In World War II, when New Zealand thought they were important enough to be invaded, a series of bomb shelters were dug beneath the university. If you’re burdened by having too many teeth then you’re in luck, as one of these secret tunnels includes a radium room. Another bunker was converted from a morgue, which raises more questions, like why the Geology department had a morgue in the first place?

Mysteriously, singed maps depict even more tunnels throughout campus. We don’t know if these were actually built or not, as the staff who knew those secrets have all been coincidentally “let go”. Interesting.

The Girl in the Ceiling

Drama kids will know Allen Hall as the theatre opposite Unicol. It’s the one with a charming red door, high-end technology, and a woman hiding in the ceiling.

“The girl who lived in the ceiling” is a story told to theatre freshers over the decades as they tour Allen Hall. The legend tells that an Otago student was in between flats and squatted amongst coat racks backstage.. She was only caught when her candles — the only source of light that wouldn’t raise suspicion — became a fire hazard.

Although this sounds like white woman murder podcast bullshit, and I assumed that it was harmless hazing.

And it was Miranda Harcourt, a popular actress and acting coach who played Olga in The Hobbit. Who the fuck is Olga? Who cares! It’s The Hobbit, so she’s basically kiwi royalty.

I looked Miranda up on Facebook. We had nine mutual friends (I hate New Zealand). I flicked her a message asking about the legend. She confirmed:

“Me and my flatmate whose name I won’t mention but is an employee of Otago Uni, moved into the dressing rooms upstairs there for a while in between flats. Would have stayed for longer but one morning I came down in my bare feet and skimpy nightie to get some hot water from the front bit at the top of the stairs, only to find 100 students in there doing an exam. Busted! We had to move out xx”

What an absolute queen. By the way, a whole bunch of you DEFINITELY know Miranda’s accomplice, and have probably been lectured by them. I promised I wouldn’t nark though.

To all of you who want to bone Mothman (is it just me?), you’re in luck. Dunedin has its own sexy, slightly furry cryptid.

Dunedin Dog Boy is the werewolf boyfriend of your dreams. Aotearoa’s top cryptozoology website, Paranormal New Zealand, describes him as a bipedal dog who lurks around Halfway Bush. He’s tall and dark, with raven black fur and flaming crimson eyes that swallow you whole. Local youths whisper in hushed tones about how Dunedin Dog Boy lies crouched amidst the brambles and stalks his prey. Imagine you are walking home one night when a husky growl permeates the darkness. Goosebumps prickle along the nape of your neck. You swivel around, a cold chill engulfing your body as you meet those effervescent eyes. The Dunedin Dog Boy licks his chops and smirks. He lunges forwards and seizes you around the waist with strong hands, rough from the wild hunt. The musky contours of his body fill yours. His snarling muzzle glistens with flecks of saliva. He grabs a fistful of your hair and tilts your head back, exposing your throat. He bares his teeth and your legs tremble as your inner goddess purrs. A tingling sensation floods your yoni. You kiss, passionately, his tongue invading your mouth, loins aflame with desire.

Other reports depict him as a small black dog on four legs who chases people down the street and nips at their ankles. I don’t have proof but I think that it’s just a dog.

I put this legend to the test by visiting Halfway Bush late at night in my Team Jacob lingerie, reclining gorgeously in the moonlight. As to what happened next, a lady never tells.

Rumour has it that if you get stuck in the Richardson lifts, you will become gay.

I never believed this until one fateful afternoon when the lift jammed. I picked up the emergency phone to dial help, but instead only “yaasss queen!” and “oh my Gaga!” streamed from my mouth. I panicked, then adopted a cat with the girl to my left.

I imagine that, if you are already gay/bisexual/other, you will turn immediately heterosexual. Straight as a ruler. Here’s your complimentary The Office merch.

Our university’s most famous ghost is The Grey Lady. Allegedly, after giving birth in the hospital’s psychiatric unit, our protagonist’s newborn babe was whisked away by a nurse who deemed her an unfit mother. The young mother passed away and proceeded to haunt the nurse’s residence across the road — today’s Cumberland College — in search of her lost baby.

The Grey Lady’s most notable feature is being smelly (same). Two Cumby Health Scis in 2012 were scared pantsless when they noticed a nasty stank, a cold chill, and a dark apparition looming ominously beside a fire hydrant. Freshers went apeshit. Chaplains were brought in, students refused to sleep alone, and actual, non-student, press got involved. Cumberland has been professionally exorcised numerous times since then. Residents should investigate a cleansing ritual, like sage but without the cultural appropriation.

Unfortunately, we did what we do best. We forgot about Hayward. Here’s a treat for you: more secret tunnels! Cumberland and Hayward are linked to both each other, and Dunedin Hospital, via an underground network, so they definitely aren’t safe from The Grey Lady’s visits.

Cumby isn’t the only hall with a resident ghost. Knox College’s ghastly grounds are haunted by Ollie, a man from the early 20th century whose apparition is credited as being due to one of two tragedies:

Personally, I’m partial to Option 2. Ollie dying in the war and coming back to haunt a university hall is mad depressing and has major peaked-in-high-school vibes. Imagine being stuck in your leaver’s hoodie for 100 years. I once had a scary dream about a ghost living in Arden House before I even learned about this incident, so I want my own That’s So Raven spinoff. Plus getting squashed during tennis is a little bit funny.

Studholme supposedly has a ghost too. This is a real and depressing story regarding infanticide, so respectfully research at your own risk.

Next time you’re refilling your sertraline at the Gardens Pharmacy and feel a pinch on your bottom, think twice before slapping the person behind you in line. It might very well be the ghost of the pharmacy’s slimy old boss, who had a habit of pinching his female staff’s bums in both life and death. This tale has been documented by a reputable source, Andrew Smith, a man who wears a top hat and holds Dunedin’s Hair Raiser Ghost Tours.

Otago Uni’s superstitions may be better founded in reality than you think — something to consider next time you smell a putrid stench, or hear Miranda Harcourt in your ceiling. Truth can often be stranger than fiction. Now if you’ll excuse me, I have a date at Halfway Bush.