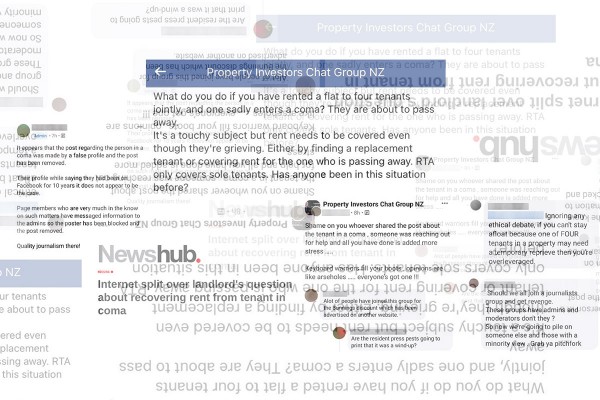 It all began when my flatmate didn’t do the dishes. I wondered what would happen if she died under mysterious circumstances. Would the rest of us get free rent, or would we have to cover our deceased flatmate’s share while mourning?

It’s a deeply upsetting scenario. When devastating events like this do happen, friends and relatives are left to grieve while the world moves on. I joined a few landlord forums and asked them how they’d handle it. I didn’t say that I was a landlord, but I didn’t exactly say that I wasn’t a landlord, either.

“I don't want to cause a scene but let's say hypothetically if you rent a flat out jointly to four students and one sadly passes away, what the hell do you do?” I wrote on one forum. “Answer quick pls.” In the Facebook community page Property Investors Chat Group NZ, I asked what you’d do if your tenant entered a coma, and was unlikely to recover.

Hell broke loose. Arguments between landlords exploded within the comments of Property Investors, and the thread was locked within an hour. The post was screenshotted and shared on Reddit’s r/newzealand, where it received almost 300 comments, a hectic mix of sympathy and rage alike.

A couple of days later, Newshub released an article: “Internet split over landlord's question about recovering rent from tenant in coma.”

It was my post, reported as genuine news. “While the question appears to be genuine, the landlord has been put on blast for the post — with some complaining that it's distasteful and others questioning their human decency,” the author wrote.

Yes, the question “appears to be genuine”. It was a genuine question I had, but certainly not from a genuine landlord, as Newshub reported.

I originally felt guilty of entrapment, for being complicit in misinformation. It’s understandable to assume that I, a poster in a landlord-based group, would be a landlord. But it’s not my fault that Newshub reported a post they found on social media as fact. Newshub did not check the original source, nor make any attempt to contact my landlord-sona. They scrolled through Reddit, found a spicy post, and decided to share it as news.

The funniest part is that I used a fake account I made in year eight for my furry character ‘Agnes’, an anthropomorphic sheep whose job is listed as having worked at ‘The War’. If Newshub actually bothered looking at the original source, they’d realise that even the admin of Property Investors Chat Group NZ had the foresight to realise my account was blatantly fake. “It appears that the post regarding the person in a coma was made by a false profile and the post has been removed,” the admin wrote after booting me out. “Quality journalism there!” (Thank you, Scott.)

There’s a reason that I didn’t explicitly state I wasn’t a landlord. No landlord was going to give me an honest answer if they knew I was but a lowly serf. Doing what I did gave me valuable insight into landlords’ psyches, who offered me touching advice such as this:

“Rentoids should pay you no matter what.”

“Life goes on, the rent still needs to be paid. If you wanted you could give a weeks free rent to show courtesy and respect for the deceased. I have had a tenant die and its a straightforward process [sic].”

“This is a business,” said one simply. Another comment echoed this: “At the end of the day this is a business. Forgiving 25% of the rent for four weeks is cheaper than eviction,” possibly implying that the remaining tenants would be evicted after their flatmate’s passing.

“Almost every lease is a joint lease, unless otherwise stated, aka everyone involved is most likely on the hook. It’s up to them to pay,” continued another.

“Everyone's expecting the landlord to shoulder this and I understand why, but at the same time, would banks do the same if someone died and the other person couldn’t cover the mortgage?” one landlord wrote. “Or would they force you into a mortgagee sale? Banks hold a LOT more wealth than individual landlords.”

“I find it interesting that it’s always the landlords who are expected to have the morals and compassion to forfeit rent, never the supermarkets that people buy food from, nor banks with mortgages nor government with rates and taxes nor power and water companies,” was a response. “The 1% are untouchable,” lamented another commenter.

“Not [a difficult situation] at all. This is a business and the total of the rent needs to be paid by anybody on the lease and it isn’t your job to figure out who pays what. They need to figure it out. I’m guessing they decided to live with each other.”

“Unfortunate situation but the tenants are ‘jointly & severally liable’ so if one flatmate cannot pay then the others are still responsible for ensuring you get the full amount.”

“did they each sign a seperate tenancy agreement? If they all signed together I suppose you could ask them all to chip in [sic].”

“I would imagine it's up too the other Tennants to sort this [sic].”

“Could that tenants part of the bond be released for rent? [sic]"

Heartwarmingly, in the original comment thread, an enormous number of pitchforks were raised at me. “The fact that you even have to ask this question says a lot about your business ethics,” one landlord typed, flanked by a dozen comments telling me to apply compassion and postpone or reduce rent. It’s reassuring to know that many landlords do, in fact, have their tenants’ wellbeing at heart. It’s simultaneously perturbing, although unsurprising, to see the opposite as well.

I learnt two things from this. Firstly, yes, you are obliged to cover your deceased flatmate’s rent, unless your landlord has a basic understanding of what compassion is. Secondly, there’s a high chance that the ‘news’ you read online is just a Reddit post that some dude found, created by a random student who will never own property in her lifetime.

Anyway, did you know that Jacinda Ardern is actually a lizard?