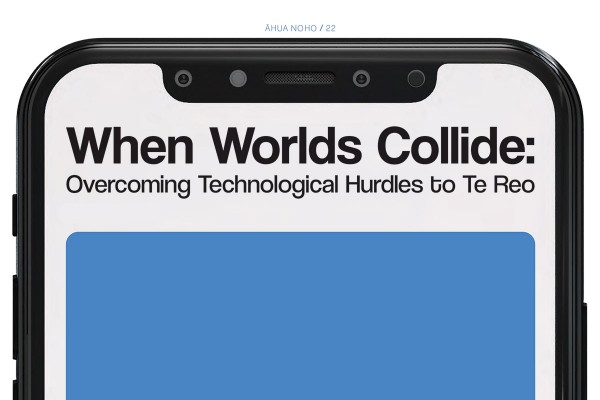 The digital world can provide a place for te reo Māori to thrive, but a number of technological hurdles stand in the way. One of the largest problems is with autocorrect and spell check.

Students found it annoying when te reo words autocorrected to English words. Other times, kupu have that persistent little red line underneath them indicating a spelling mistake.

Dani told Critic that: “Word and Grammarly are a pain in the arse when it comes to plural use of te reo words. For example, the word Māori can be plural or singular, but Word and Grammarly think it is always singular (because there is no S) and make suggestions based on Māori being singular.” There is no plural S in te reo, and when technology doesn’t account for that it can cause problems. “I would be correct to use 'are' after the plural use of Māori, but spell checkers will suggest using 'is'.” Dani believes that if spell checker software  properly incorporated grammar conventions for te reo, it would make learning a lot easier.

Rosie found similar problems with a text-to-speech program she uses through disability services, which simply didn’t pick up any words in te reo Māori. “It usually means I either don't use the speech to text program (which is a really helpful program for me) or continue using it but then using less te reo.”

Mason has encountered issues when filling in her last name in forms online. “It tries to be like, ‘no you’re wrong, that’s not your name.’ It’s honestly the most annoying thing because I have to constantly go back and change it or go to the effort to set it as a word on any new phone or laptop I have.”

Another common issue was adding tohutō (macrons) to words where necessary. These straight lines go above vowels to indicate it is a long vowel. Whether on a phone or computer, it can be frustratingly difficult and the simplest way to get a tohutō varies depending on the device. On a Windows computer you can use ‘~’ + a to get ā if you add te reo in your keyboard settings. On an Android phone keyboard, you can access accents and symbols by holding down letters. However, it appears tohutō are only available on a, e, i, and u and not on o for some reason. Google Docs sometimes allows users to type macrons, but it often glitches out.

Different students had different approaches to get around this hurdle. Some used double vowels instead of tohutō (eg. whaanau instead of whānau). Some would use õ instead. Some would Google the word they needed to use and would copy and paste it in.

“It does a disservice to te reo Māori,” said Hōhua.

Professor Lachy Paterson, the Acting Dean of Te Tumu School of Māori, Pacific & Indigenous Studies, agreed that “predictive text and spell-checkers/correctors can be annoying.” He said that “It is often the little words such as changing ‘ki te’ to ‘kit e’, or capitalising ‘i’ when it shouldn't. Using Microsoft Word on my computer, I have added these, and words I commonly use, into the dictionary, or I make sure the auto-correct doesn't do what I don't want it to.”

These issues may seem minor, but they provide an unnecessary hurdle to using te reo Māori in everyday life, whether as a beginner or native speaker. Rosie told Critic that she “would definitely be using way more te reo if it was supported by spellcheck and text to speech.”

Hōhua told Critic how ‘tangata’ has been corrected to ‘gangster’ before. These problems highlight how technology often fails to cater to anyone outside of a white, non-indigenous demographic. Just last week Facebook apologised for facial recognition software that labelled black men ‘primates’. These issues are structural and are not going away anytime soon, but there are countless good people working tirelessly to improve equity in the digital world.

There is progress in using digital technology to help te reo Māori thrive in Aotearoa. Both iOS and Windows 10 introduced multilingual typing that eased autocorrect woes years ago. In recent years, a number of new apps have been released to help second-language learners use te reo more easily and more often, like Hapori, Kōreroreo, and Kupu. Popular language app Drops introduced te reo Māori in 2019 and Duolingo plans to release a te reo Māori course soon.

With te reo Māori more digitally accessible than ever, there are fewer and fewer excuses for Pākehā and technology companies not to try and use te reo Māori more.There’s still a long way to go in fully integrating te reo into our digital lives, and it’s still best to review everything manually. Professor Paterson said, “I also try to check over any blogs, texts, emails, and posts (etc.) I have written before I send them out. It's good practice as there can be typos, and spell-checkers can muck up English-language writing as well.”