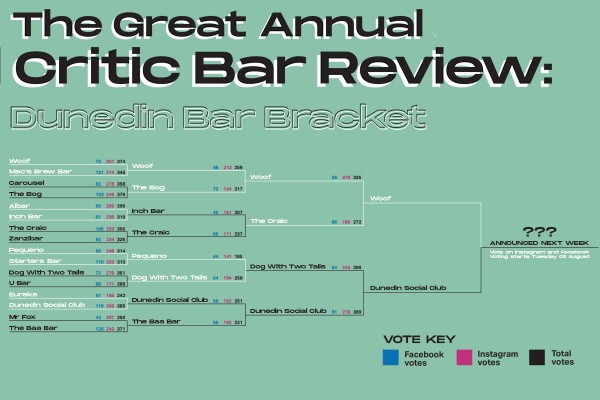 I love numbers, and I love beer. Here’s a bit of both.

Behold: The Bar Bracket. We realized that allowing one reporter to rank the bars of Dunedin was a terrible idea, so we gave the power to you, the people, to decide which bar ranked supreme.

As you may have noticed, not every bar in Dunedin was on this bracket. This is because of how the bracket was made: Each Critic staff member ranked their 16 favourite bars from #1 (best) to #16 (worst). The 16 bars that were most commonly in someone’s top 16 ended up on the bracket, which is why some bars like Emerson’s (one of my favourites) didn’t make the cut. Tough luck.

We seeded the bracket with #1 overall vs. #9 overall, #2 vs #10, and so on. And then we put this bracket on Facebook and Instagram for you to vote on. You could vote twice, once on each platform.

As we enter the finals, let’s take a look at what we’ve learnt so far.

There were always more votes on Instagram than on Facebook, but both vote totals were combined to find the winner of a given round. However, opinions were very clearly split across the two platforms. As you can see in the bracket, many bars would lose the Facebook poll but win the Instagram poll, or vice versa. Instagram seemed to favour the trendier cocktail bars, while Facebook rated the club scene. Something about this makes sense.

In a great example of the power of democracy, Pequeno just barely survived round one after it beat Starters Bar by a single point. We didn’t have a tiebreaker planned so this was a relief. Other matchups weren’t as close.

A particularly ironic matchup, considering that the office was most heavily divided on these two bars. DSC received such feedback as “I feel like I may get Scabies there” and “it’s a good, reliable fallback, like an ex.” Woof was called “a cocky cocktail bar for cockheads” and “the grooviest place in town to wait in a queue.”

DSC absolutely destroyed its first round contender Eureka, and made handy work of Dog as well. It had a close call against The Baaa. Woof was off to a rocky start against Mac’s, but has been gaining steam since then. Each round, Woof has won by a greater margin than the previous. Will the trend continue? Will Woof be the Top Dog? Time will tell, and come next week, we will all D-S-See.

Voting will open on Critic Te Arohi’s Instagram (@criticmag) and Facebook stories on Tuesday. A third-place B-final will take place between The Craic and Dog with Two Tails at the same time, and results will be published in the next issue.