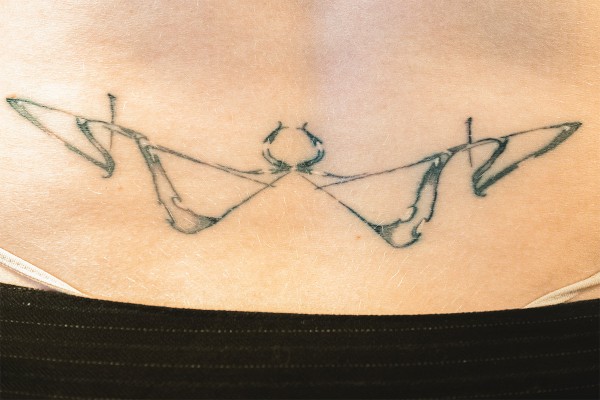 Love them or hate them, lower back tattoos are back. But is there a justified reason for the ink’s bad reputation, or is it just good old-fashioned sexism?

Worn by the biggest and best icons of the 2000s – Paris Hilton, Britney Spears, Christina Aguilera, and Kate Moss to name a few – the tramp stamp lives alongside jeans under dresses, ultra skinny scarves and velour tracksuits as an absolute hallmark of the decade. But why does the lower back tattoo evoke such strong reactions, even today? What’s the deal with its comeback?

According to Wikipedia, lower back tattoos came as part of the growing number of women getting inked up in the 1990s. Before this, tattoos were uncommon on women. The tramp stamp was often sported with low rise jeans and a high rise g-string, together forming the iconic whale tail. They were somehow simultaneously high-class and trashy, sported by millionaires and A-list celebrities as they drunkenly stumbled between clubs in front of paparazzi.

Maybe it’s just the hindsight bias, but one thing is blatantly obvious about the labelling of lower back tattoos as tramp stamps (or slag tags, if you watched Skins at age 13). It’s overtly misogynistic. The phrase might be outdated now, but tramp is just another word for slut, and to call a woman a slut is just another way of shaming her for having any sense of autonomy or pride in her own sexuality.

The rise of the modern influencer (thanks, Paris) via social media has afforded women more control over who has the power to sexualise them. How women represent their own sexuality is more and more on their own terms. Maybe this has contributed to the return of the lower back tattoo amongst the it-girls of this decade? Five years ago, lower back tattoos were arguably limited to middle aged women, and existed only as a reminder of decades past. However, just like tiny sunglasses, slip dresses and baby tees, the tattoo seems to be on its way back in. Instagram influencers such as @sydn4sty and @meicrosoft rock the stamp, as does Critic Te Arohi designer Molly.

Molly says her tramp stamp “represents a moment in life for me, a freeze-frame of the person I am now and the aesthetics I find exciting.” She says it’s a way of challenging people’s preconceived notions of what tattoos represent. “I’m really interested in the idea of challenging high-brow standards in my art and that carries through to my tattoo, taking something that people generally view as ‘trashy’ and deciding to own it in a way that changes its value to something iconic and artistic. It’s always exciting and interesting to challenge people’s idea of what makes something ‘trashy’ or lacking in class.” She says the tramp stamp “transcends a trend … Live your iconic trash queen fantasy, I say.”

Tattoos are heavily connected to a sense of bodily autonomy, and the revival of the iconic lower back tattoos links directly to women deciding to take back control of their own body image. They are challenging ideals built out of misogyny by getting these tattoos and owning them, therefore challenging the stereotype of what kind of woman would have such a mark indelibly on their body. The reclamation of the lower back tattoo is a push back against the shame women have endured for their choices, especially if they are remotely sexual or sexy.

Radio One interviewed students in the Link (at 3pm on a Friday, so a clearly representative sample of students, who all spend their Friday afternoons studying) as to whether ‘tramp stamps’ are trashy or iconic. Many said trashy, but there was no clear consensus. One student said “if you own it, dig it, then it’s iconic.” Another said he enjoyed an “appropriately done” tramp stamp, such as a Chanel logo or a “classic cherry.” The same student was considering getting a lower back tattoo of Karl Marx’s face.

When you strip away the misogyny, there’s no reason why a lower back tattoo should be treated differently to any other tattoo. Whether or not you want one yourself, appreciate the aesthetic or not, there’s nothing inherently wrong with a lower back tattoo. Let’s focus that critical energy on white people with tribal tattoos instead.