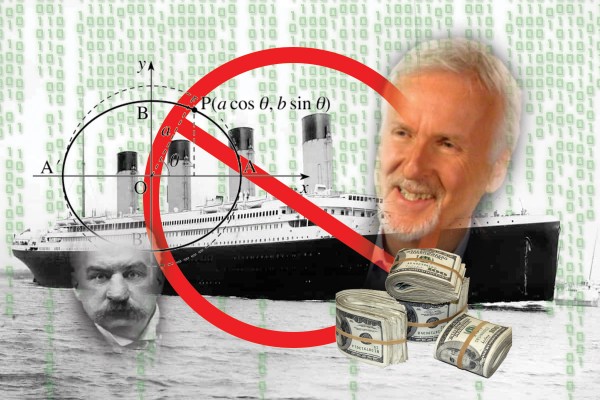 JP Morgan and James Cameron are working for Big Ice

I don't know about you, but I've never met anyone who was on the Titanic when it sunk. Strike one. Do they really expect us to believe that “the unsinkable ship”, effectively a spaceship, really sank on its maiden voyage? The whole thing smells fishy, and I’m about to enlighten you.

Two things to remember when engaging in normal, social discourse on any subject. Follow the money, and don’t be a sheep. So that’s exactly what we’re going to do. Let’s start with not being a sheep.

The sheep thing to do is accept the narrative being pushed by Big Ice. That the Titanic, a massive, metal behemoth of the sea, was sliced open by a giant chunk of ice. Ice, AKA frozen water, AKA the stuff that you can break with your teeth. That this multi-million dollar project (with quite the pricy insurance package) just haplessly sank to the bottom of the ocean. Because of ice.

A sheep would accept this. But we wolves, the members of society with our eyes wide open, will never accept this. Obviously there was an ulterior motive. Why else would a fully-functioning, state-of-the art vessel steer directly into a large obstacle? And, remember, if jet fuel can’t melt steel beams, ice definitely can’t.

Now we have to follow the money. JP Morgan, a famous rich white man, booked a ticket and cancelled at the last minute. Three of his rival millionaires perished on-board, paving the way for him to inspire Monopoly’s Rich Uncle Pennybags™. So obviously he’s involved.

Sinking a brand new ship would make no sense, until you consider that maybe the Titanic never sank at all. The vessel’s sister ship, the Olympia, had just suffered massive damage to its hull and was deemed unfit for service. JP Morgan, ever clever, convinced the company to sail the Olympia under the name “Titanic”, and sink it at the first opportunity, reaping the insurance money for a useless ship.

“But we’ve all seen the pictures!” you cry. Who took those pictures? That’s right, James Cameron, filmmaker. He makes movies, so he lies for a living. Obviously fake. Since ice can’t cut steel, a bomb must have been planted and detonated to simulate a crash.

Big Ice is behind all of this. After making icebergs seem extra dangerous, Big Ice pumped money into the fossil fuel industry to melt all of the remaining ice on the planet. Then, when climate activists took note of the damage this would cost, Big Ice set up dozens of NGO’s to collect money to “save the icebergs.” Where did this money go? It was laundered through ticket sales of James Cameron’s Titanic.

See? See how fucking crazy this sounds? This is how crazy you sound when you talk about QAnon or 5G.