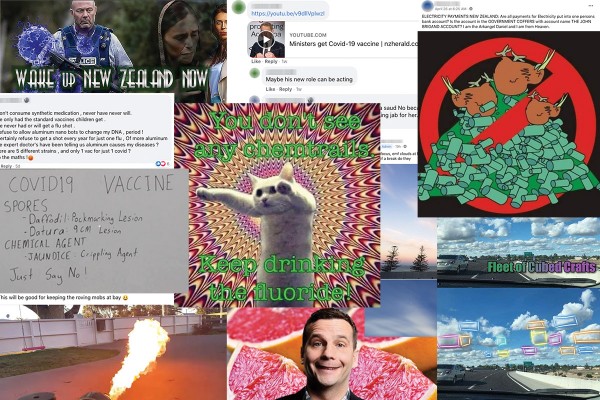 Aotearoa’s Conspiracy Pages Are a Cesspit

I went into this expecting to find some wild and quirky conspiracy theories. I found some. But it took a lot of trawling through the same racist shit to get there. New Zealand’s conspiracy scene is warped, hateful, and absurdly ignorant.

This group is fucking huge for some reason. There are over 20,000 members and they all hate 1080. On the surface, this is a simple cause.

But it goes a lot deeper. Members of the group link 1080 to vaccines, Covid, and even Bill Gates. One commenter rails against fake meat and Bill Gates in one post about a new 1080 drop in New Zealand: “Killing all Animals so her mate bill gates can have his multi million dollar "3DMeat" enterprise to feed the world..they're 2 peas in the same rotten pod.. And together they're KILLING US.” There is some opposition to conspiracies that aren’t related to 1080. One commenter says “Study the science ! The vaccinations are safe!” on a post about the Covid vaccine. Overall, 1080 descends quickly into deeper mistrust of the government and science.

The group has rivalries, too. There is division between people who care about animals and people who want to hunt animals. One section of the group argues that 1080 is sadistic, while the others complain that it is killing the fur trade as there are no possums left for hunters.

Likelihood of destroying normal people’s lives: 6/10, only relevant if you care about possums a weird amount

The name and cover photo of this group are intriguing. Why did they not capitalise the word “up” in the name of the group? Is their cover photo supposed to imply that the Police are spreading Covid-19 on Jacinda Ardern’s orders?

Billy Te Kahika videos are surprisingly unpopular in the group. They prefer even more wildly unreliable sources, like the group’s admin, who makes claims like “apartheid is now prevalent in New Zealand.” They also love Nigel Farage. The group are really angry whenever people use the word ‘Aotearoa’, and they love to talk about that. “NOT AOTEAROA IT IS NEW ZEALAND AND SHOULD ALWAYS REMAIN NEW ZEALAND,” said one group member on a post about what to call Aotearoa.

Likelihood of destroying normal people’s lives: 5/10, only appealing if you’re already a racist boomer at heart

The vibe of this Facebook group is wholesome, but absurd. There are less than a thousand members who are pretty active at posting low resolution photos of lights in the night sky. People post blurry photos of lights in the sky and speculate about what type of UFO it could be. They even think there are cube-shaped UFOs in clouds. I want to believe, but Ufo sightings and stories NZ does not make it easy.

Their belief in UFOs is naïve, but it’s reassuring as far as conspiracy theories go. The group simply believe that there are alien spaceships in the sky. It makes me yearn for a simpler time where I could look up at the sky without being freaked out by Elon Musk’s Starlink.

This group is conspiratorial, yes, but it’s also just racist. The best conspiracy in this group is that David Seymour is a communist, which someone had written an entire blog post about.

One member posted a long joke about Jacinda Ardern talking to the devil. The punchline is that Jacinda doesn’t get charged for the call because: “Since Jacinda Adern became Prime Minister of New Zealand, the country has gone to Hell, so it’s a local call.” You have to feel sorry for people who are still making jokes about landline charges — this post garnered 150 reactions.

The name of this group sounded good, like it was going to explore some spicy mysteries and conspiracy theories. I expected it to have a Dan Brown-novel illuminati vibe. Sadly it’s just racist. There are some weird conspiracies peppered through, like that giants exist and someone suggesting that all electricity bills in New Zealand are paid into one bank account for sinister purposes.

“ALL INLAND REVENUE TAX FOR NEW ZEALAND AND WORLDWIDE including THE IRS IN THE UNITED STATES OF AMERICA: Does all tax World Wide go into one persons bank account in the New Zealand Governments Coffers? Is the account called THE JOHN BRIGAND ACCOUNT?” the poster asks.

Destruction level: 4/10, toxic but not coherent enough to convert people

If these are the people who survive the apocalypse, I don’t want to survive it. They’re obsessed with silver bullion (penis shaped blocks of silver) and figuring out which foods will last for decades.

The foods which will survive the apocalypse kinda suck too. There’s a lot of discussion about which pigs are best to keep next to your survival hut and which ones will eat the most possum carcasses for you.

Some posts are terrifying. “This will be good for keeping the roving mobs at bay  ” writes one poster along with a video of his fucking huge flame thrower.

Likelihood of destroying normal people’s lives: 6/10, you could waste a lot of money buying pressurisers for canned food and water purifiers

This is a typical post from Geoengineering Watch NZ. “I woke up and [the moon] was right outside my bedroom large as life but glowing a weird orange colour. … Last night the moon was back to its usual grey colour.” A commenter reckons the orange moon is because of “reflective particles in that chemically induced sky shining through the moonlight.” Clouds are not just water vapour, either. They’re government radiation.

This group pivots hard into anti-vax thinking. One poster states: “c.o.v.i.d.v.a.c.c.i.n.e which is not a v.a.c.c.i.n.e … it is a g.e.n.o.c.i.d.e w.e.a.p.o.n transmitting via emf/wifi from v.a.c.c.i.n.a.t.e.d to the non-v.a.c.c.i.n.a.t.e.d.” They use dots in between all the letters to avoid the misinformation being detected by Facebook filters.

“Thank the sellout gatesadern govt born out of hate inspired by GREED and the Need to CONTROL.MAKE THE LIE BIG....MAKE THE LIE FREQUENT...AND EVENTUALLY HUMANS WILL BELIEVE IT..LIKE SHEEP TO THE SLAUGHTER..HITLER LIVES ON THRU THE GATESADERN GOVT.GO FIGURE,” one commenter replies.

Likelihood of destroying normal people’s lives: 10/10, sucks you in with some fun cloud watching and then escalates all the way up to Bill Gates and Jacinda Ardern, who are both apparently Hitler