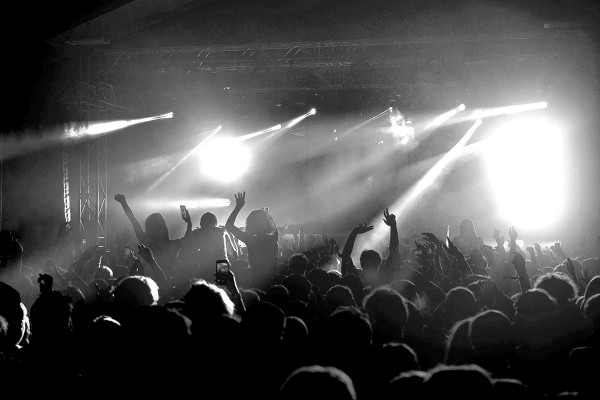 While moshes can seem like animalistic anarchy, there is a crucial code of conduct that keeps all participants safe in their gnarly sonic and sweaty adventures. Moshing, which started up during the ‘80s with the rise of punk and hardcore, is now a widespread concert activity.

The original rules still apply, but some of them get forgotten. A mosh is a respectful and safety-conscious environment where all people, no matter their gender, age or skin colour can get rowdy to their favourite music. They should not have to worry about absolute assholes ruining that pure and exciting ‘makes me feel alive’ experience that we all strive for in the mosh.

This is the correct etiquette of the mosh, so that you can get turnt as fuck but still have a safe time out there.

#1 LOOK OUT FOR EACH OTHER

I cannot stress this enough. If you see someone fall down in a crowd, pick them up. If you’ve chosen to attend university and don’t even think to help another human being who is at risk of being trampled up, then rethink yourself, you selfish fuck.

Smile and greet other people in the crowd when you walk in. Becoming familiar with one another helps everyone at the gig feel more comfortable being in such close proximity together. Some of my good friendships made in Dunedin have had moshpit origin stories.

To put it simply, have a whānau mindset for the gig. If no one else initiates any of the above rules mentioned, initiate them yourself. Be the better mosh person. Go with heaps of mates and act collectively if you’re too shy to do it alone. Creating a safer, more enjoyable gig and mosh culture in Dunedin is a collective effort and responsibility.

Sadly I’ve noticed in my few years here at Otago that with drinking and drugs at gigs, some people don’t have the capacity to show common courtesy. People under the influence become more disengaged from reality and lose all sense of their moral code. Don’t be the messy one, but do look out for other people if they are getting messy.

“Courtesy is the real key to great moshpits,” said Dave, a Dunedin band member. “You can have a very tall person in a mosh being unaware of themselves, which can ruin it for everyone else pretty fast.”

I’ll admit that I have disregarded this rule. I was that fresher who would turn up real tipsy to Mild Orange and thrash about, without considering the appropriate vibe for the laid-back music. Save your dignity and pick the right music/crowd vibe to initiate a mosh.

“Be aware of the people around you in that space. You don’t have to be so wasted to see a band if everyone is actively and positively contributing to the vibe of the mosh,” said Dave. “That’s when moshpits are the best.”

Self-awareness is key here. Don’t show up to a deep house gig and start circle-pitting (the collective act of running in circles to the general tempo of the song). And don’t turn up to a punk gig and get angry when people are grooving hard. It’s not about you, it’s about a group of people responding to the music.

Mosh pits usually take place near the front and centre, so if you don’t want to partake in the mosh you can move to the sides of the crowd and still be at the front.

Be mindful of security, and respect them too. From experience, security in Dunedin are usually pretty chill with “pogoing” (when the crowd jumps up and down) and well mannered “slam dancing” (moshing by deliberately knocking into one another). Slam dancing is most debated. It can be the most enjoyable type of mosh or the most unsafe. It all depends on the overall vibe of the crowd, the self-awareness of the individuals involved, and the responsibility of the band playing.

Please. The amount of mahi Dunedin musicians put in is way more than the amount they are getting paid. Often they’re playing for free, purely for the sense of passion and love they get when they come into contact with a great, receptive crowd. “Engaging respectfully in a mosh shows support for the band which is well earned,” said Dave. “Musicians in Dunedin are usually playing for free — especially at house parties.”

Fill up the front. Some crowds are collectively shy and stand in awkward clusters well away from the front. I understand how awkward this can be, especially in venues where the musicians are playing at the ground level, but do come up close to interact with the music. But avoid damaging any of the musicians’ gear.

Cheer and clap in support. Musicians are usually playing music out of their own good will (and pocket) for you, so fully show some appreciation for them. Even if they made some mistakes, support them nonetheless. They’re putting themselves in a socially vulnerable situation so you can have a good time. Secret is, if you show them support no matter what, they can only get better as musicians and the better they are, the more stoked everyone is.