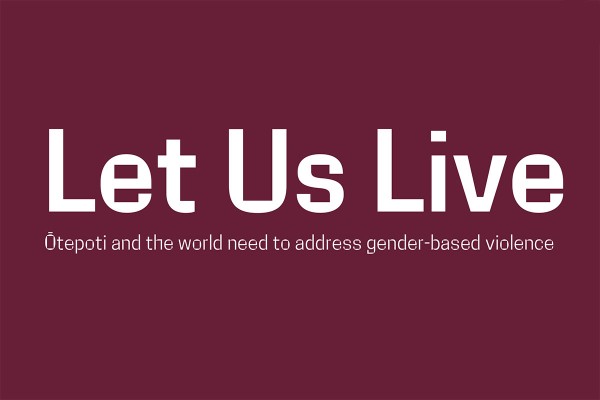 Let Us Live: Ōtepoti and the world need to address gender-based violence

Sarah Everard followed all the rules women are taught from birth. She spoke to her boyfriend as she walked through a park home at 9pm on a Wednesday, she wore comfortable and warm clothes, and shoes made for running. Still, it didn’t save her. She was killed on March 3 2021. A police officer is on trial for her murder.

In the month since Sarah was murdered, women around the world have been united in mourning, fear and maybe most prominently, rage. In London, a vigil for Sarah at Clapham Common — the site of her murder — was met with a heavy-handed police response, only exacerbating that fury. Closer to home, a protest in Pōneke on March 31 was attended by hundreds, rallying behind a simple message: let us live.

Sarah’s murder, committed by a strange man in the dark, represents a fear deeply held by most women and gender minorities. However, the severity of this fear does not represent reality — sexual offences where the victim and offender are strangers are only a minority of sexual offenses in New Zealand. Most are committed by current or former partners, family members, or those otherwise known to the victim.

In Aotearoa, one in three women experiences sexual or physical violence at the hands of a partner in her lifetime. 50% of women murdered in this country are killed by a current or former partner. Sexual and gender-based violence occurs in relationships of all kinds and must not be viewed in a binary manner, but the vast majority is perpetrated by men, and most victims are women. Sarah’s murder is not a random, isolated tragedy. It is symptomatic of a global epidemic of violence towards women, as well as gender minorities.

Since January 2019, New Zealand Police data shows that 944 sexual offences have been reported to police in the Southern police district (which covers Ōtepoti as well as the Otago and Southland provinces). Only a minority of sexual assaults are reported to police in Aotearoa. A report from the Ministry of Justice in 2020 estimated that only 6% of women who are sexually assaulted report it to authorities.

Three Otago University students were disciplined with regards to sexual assaults last year, but as Thursdays in Black representatives told Critic earlier in the year, this likely only represents a small percentage of sexual assaults within the student population. Karyn Thomson, Director of Student Services at Otago, says there are numerous reasons students who have been sexually assaulted might not seek support or justice, including fear of retaliation from the offender, fear of shame and judgment, and the impact of going through the court process upon their study and lives. She identified Te Whare Tāwharau as the primary provider of support for students affected by sexual assault, saying the shelter “blends academic research and expertise with best-practice” in preventing sexual violence and supporting victims.

Dr Melanie Beres, Associate Professor in the School of Social Sciences at Otago University, says that despite the low statistical likelihood of a woman being sexually assaulted by a stranger, the prevalence of street harassment and catcalling “erode that feeling of safety, even if the people doing it have no intention of physical harm.” Commonplace kinds of sexual harassment feed into a culture where women and gender minorities are forced to change their day-to-day actions to feel safer.

Rebecca Shepherd, an executive member of Thursdays in Black Otago, says that widely held attitudes to women’s safety, “broad attitudes which a lot of people have, and don’t always realise they have”, are the underlying factor in the issues that we face in moving towards a world without sexual violence.

No single approach is going to solve every aspect of sexual assault and gendered violence. Thomson says Campus Watch escort upward of 30 students home on busy nights, and all Campus Watch teams have at least one female staff member. She says that the University plays an active role in creating a safe environment for its community, and that Campus Watch is “the only tertiary campus [with a] 24/7/365 security/pastoral care service in New Zealand.”

Dr Beres says trust needs to be built between police and marginalized communities, such as Māori and Pasifika populations as well as the community. She says that a trusting relationship between the police and those communities “takes a long time to build, but not a lot of time to dismantle.” Without that trust, members of those communities are far less likely to approach police after being assaulted.

Rebecca believes that improving education around sex and consent is a crucial factor in reducing instances of sexual assault — not only in schools, but in universities and within the police. She said tertiary institutions “need to be held responsible for things that happen on campus”.

A study out of Auckland University earlier this year, led by Associate Professor Janet Fanslow, argued that engaging men and boys in education around consent and sexual assault is crucial, as they are most likely to perpetrate such crimes. According to Thomson, Te Whare Tāwharau do offer prevention programmes within residential colleges at Otago. But if such programmes are the answer, it will take a lot of care to structure and teach them correctly.

To listen to the story, tune in to R1 News on Monday 12 April.