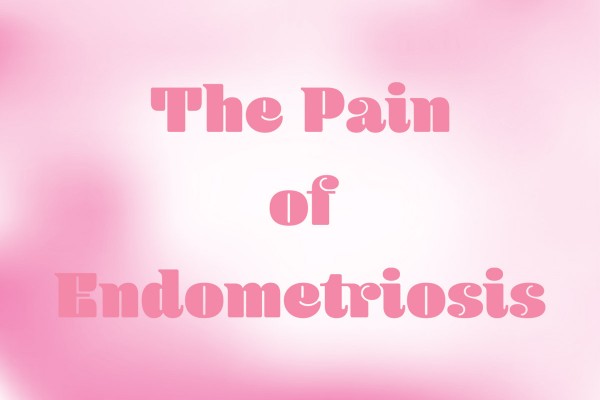 The Pain of Endometriosis

Endometriosis can be summed up in one word: pain.

Endometriosis is a chronic condition that affects one in ten women. It occurs when tissue similar to the lining of the uterus grows outside the uterus. You can only be officially diagnosed through a laparoscopic surgery under general anesthetic. There is no cure.

These are two stories of women living with endo.

A month ago, I was diagnosed with stage three endometriosis and adenomyosis. I went to the largest all girls public school in New Zealand and I never heard of this condition. Had I known of the symptoms sooner and felt less embarrassed to speak up, I would have lived with less pain and shame than I have for the past eight years. Endometriosis is concerned with topics no one likes to talk about: poos, wees, sex, periods, and fertility.

Simple tasks became difficult. It was a struggle to sit through an assembly without being in pain from incontinence. I was so constipated that I was unable to do proper healthy poop without laxatives, for months on end. I was constantly noted down in exams because I would have to change my tampon during it, or get diarrhea, or my bladder would flare up. I would fear eating food because I wasn’t sure whether I would be in severe pain within 30 minutes. It felt like the inside of my stomach was burnt.

Now that I have had the operation, I have improved my symptoms. But endo needs to be constantly managed. Currently, I am experiencing something called neuropathic pain, where my body is still experiencing immense pain, because that is what it is conditioned to feel.

To anyone out there who thinks they might have endo: Your pain is valid. You are not overreacting, or weak. There is help out there. Find a good GP that hears you, list your symptoms clearly, and tell them that you think you have endo. I was passed around from specialist to specialist until I got a diagnosis, and it wasn’t until I went in balls to the wall, chanting “I have endo,” that I got a diagnosis. Your symptoms can be relieved and managed, and you are not alone.

Endometriosis creates a pain that feels deep and intense. It causes brain fog. It would sometimes cause me to vomit, and it is chronic. In some of my worst episodes, the pain would be so intense that I felt like I was no longer in my body. My senses would go numb, I couldn’t move, and all I could do was endure the excruciating, blinding pain, hoping that it would eventually ease up.

I would describe the pain as either white hot or a dull ache, and liken it to a serrated knife being dragged across my ovaries, or a weight crushing my abdomen. I was lucky to receive a diagnosis when I was just 15 and to have undergone two laparoscopic surgeries. Despite these, I still experience chronic ‘invisible’ pain, which is a mentally and physically exhausting way to live.

Some symptoms of Endometriosis:

This month is endometriosis awareness month. For support, go to Endometriosis NZ on the internet.