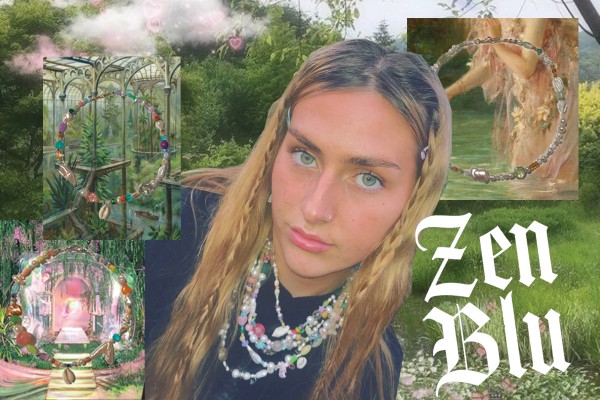 Zen Blu necklaces look like what would happen if you told a mermaid to pull apart some 70s jewellery and make it into something magical. The brightly coloured plastic beads sit alongside pearls, seashells and (presumably) enchanted symbols. On the Instagram page, the necklaces are edited onto a backdrop of hazy meadows and rivers to really round out the ethereal, other-worldly, vibes.

Zena Burgess is the designer behind Zen Blu. The 22 year-old small business owner and oral health student sat down with Critic to talk about the inspiration behind her work, and how she balances her clinical days with her creative nights as a jewellery designer.

“I’ve been making [necklaces] since I was a kid really,” she says. “I remember when I was in year 11, you’re at that age where you’re still too young to get a proper job, so I started making pendants for people and selling them at school so I had enough money to go to the movies with friends.”

When the time came to move to University, Zena decided to pursue Oral Health but maintained her high school side hustle, putting her talents into both the scientific and creative fields.

“I’ve always known I wanted a job where I could use my hands. I loved science in high school, but I also did painting and design. I was like, how can I combine the two?” While Oral Health offered her job security, jewellery making offered her a way to maintain her artistic side — both made use of her hands.

Zena reckons she inherited being academic and imaginative from different sides of her family. “With my family, half of them are designers and musicians, and the other half are doctors and lawyers. I would like to think I inherited both.”

Zena describes her work as a “vintage fairy dream” or a “pixie dream girl fantasy.” “I love pastel colours, bright colours, I love pearls, probably because they remind me of teeth and I do oral health,” she laughs. “I really love everything magical, I want to be as weird as I can. Although I do pick out the beads I want and lay them out so they’re balanced, I love keeping it as random as I can,” she says. Zena also uses recycled materials to create her jewellery, often op shopping and upcycling pre-loved beads, meaning that every piece is both individual and sustainable. “Heaps of necklaces I’ve made are so different, some are vintage, some are cute, some are metallic,” she says.

The name of her brand also emphasises the importance she places on being zen, and having the ability to flow into a creative mindset. “I have to be in a zen state to relax and to create. I find jewellery making my zen time, as being in a clinical environment is stressful. My goal is to be as zen as possible.”

Zena says her jewellery orders have “accelerated” in recent weeks, and her goal is to make Zen Blu as big as she can. “I get so much joy from people wearing the necklaces. It makes me so happy, I want to get it as big as I can. It’s been tempting to drop [oral health] and do jewellery full time, because it’s so much fun,” she says. Over the next few weeks, Zena hopes to start doing market stalls with her flatmates, who are also creatives.

To order Zena’s jewellery, DM @zen.blu on Instagram, or keep a lookout for her upcoming market stalls.