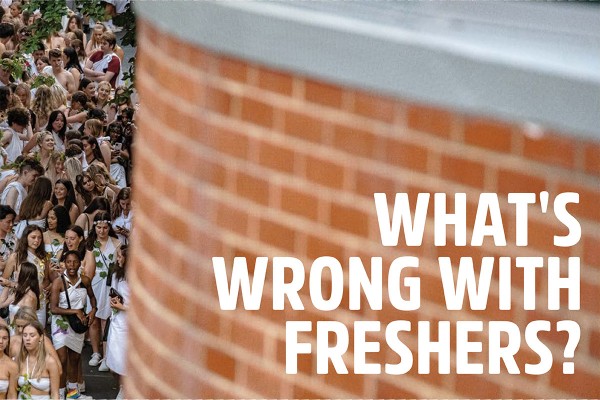 We intercepted first-years on their way out of the Toga Party to ask a simple question:

What is the biggest problem in your life right now?

Three new friends all admitted that “coming from a solid group of friends back home, and starting anew” was really tough, but patted each other on the back. “Just gonna keep being involved in what our halls and what our uni has to offer. Everybody's missing home, everyone feels alone, y’know?”

A young lady came right out and told us that her ex-boyfriend followed her home last night. “I talked to my RAs and they're helping me get some sort of restraining order, and I'm all good now. I’m actually feeling quite safe, which is a good thing.” She spent the rest of the conversation talking about North American trees.

Three mates walking home each said that they missed their families up in the North Island. Make flights cheaper, they say. “We’ve only just got here on Sunday, once you get through this first week, you kinda can go hundies. Won't be thinking about home so much and we’ll be busy doing other things.”

“Not enough sex.” “But you have sex every night bro.” “I know bro, still not enough.”

“I love personal questions, I'm the most open person in the world, hit me,” a guy said. “My mum. I'm so glad that I’m away from my mum. I’m a different person when I’m with her, in a terrible way. So I guess I don't actually have a problem now.” He leaned into the mic: “deadass, not even joking.”

“It’s literally just boys,” said two girls who’d just met each other. “She was by herself and her phone was dead and she was crying about her dickhead ex-boyfriend,” said the one doing the consoling. “A year and a half of a relationship, and it just ended so poorly,” said the one being consoled. “I wish I had a more complex answer than boys, I really do. It’s not what it should be.” And then they went their separate ways, shouting an eager goodbye over the booming background of D&B.