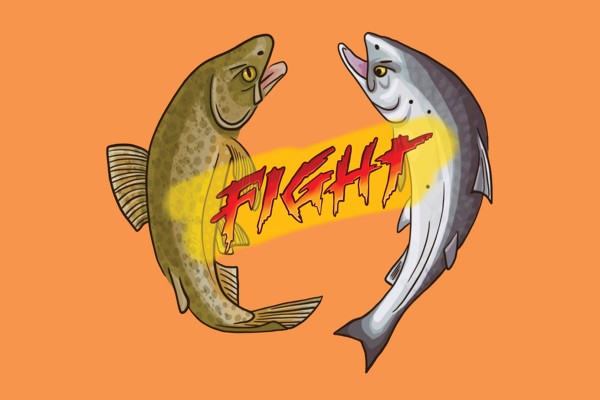 Who would win if the Rakaia Salmon and the Gore Giant Trout fought to the death?

The battle of the giant fish statues: A Critic investigation

In the centre of Gore stands a giant trout. On the outskirts of Rakaia stands a giant salmon. The fish are perched in the same pose — frozen in mid-air with cavernous maws agape. Separated by 452km of State Highway one, these twin titans of the South Island road trip are too far away to see one another. And it’s just as well. If the two giant fish of the South Island did know that the other existed, they would have to fight to the death to preserve their reputation as small town landmarks.

Dunedin would inevitably be caught in the crossfire of this fight. As a place in between Rakaia and Gore, it might even serve as the battleground. In light of this danger, Critic decided to investigate each fighters’ stats so you can make informed bets when you bet the flat food budget on the fight of the century at the TAB. Clearly there can be only one survivor. Our criteria are as follows:

The Gore Giant Trout is the OG giant fish. It was constructed in 1989 with funding from the Gore Lions Club, to celebrate their 25th birthday. The Rakaia Salmon was constructed just two years later, in 1991, with funding from the Rakaia Lions Club. Coincidence? Given the similarity of the two statues, their leonine origins, and their poses, it’s safe to say that the salmon was at least inspired by the trout, if not an outright act of plagiarism.

Random Google reviewers have assessed both monuments, giving us an indication of which side the audience is rooting for. The Gore Giant Trout comes out ahead, with a review of 4.5 stars out of 37 reviews. The race is tight, with the Rakaia Salmon having a review average of 4.4 stars out of a whopping 288 reviews. The Rakaia Salmon has its own Tripadvisor page while the Gore Giant Trout does not.

“Big big fish,” said Aminah Ahman a year ago, of the Gore Giant Trout. Gerard McCall was more critical with his four star review. “Iconic to Gore. Always someone taking photos of this,” he said, before dropping a bombshell with “Mores the pity that the fishery it is suppose to represent is so neglected and deteriorating with farm run off and effluent [sic].”  McCall’s analysis suggests that the Gore trout has been weakened by pollution. But the Rakaia Salmon lives amidst the dairy farms of the Canterbury Plains, so it probably faces the same issue.

“Attractive interesting sculpture. Classy version of the big fruit of Queensland,” said Celeritas2 of the Rakaia Salmon. Unfortunately, classiness does not win the fight. Frankie Whaitiri said he loved it, but it “doesn't really look much like a salmon.”

There can be no question that both these fish are dead inside and will stop at nothing to win. Their gaping mouths and dull eyes tell a tale of years spent out of the water, watching the cars drive past on State Highway 1 for three long decades.

The trout has lived in the muddy rivers of Gore. That’s how fighters are made. The Rakaia Salmon, on the other hand, is very clean and silvery. He has no teeth, like an old man with dentures. He has given up on life. The Gore Giant Trout has a lot of teeth, and it would tear apart the salmon’s throat without hesitating.

Dominique, a Zoology Masters student who studies trout, said that the result might come down to size. “I couldn’t find out the size of the gore trout, but the salmon is 12 meters, and typically the bigger fish wins as fights are physical,” she said. She also commented that a fight between the two fish was unrealistic, as they are “different species, they’re not gonna fight each other.”

Her final opinion, however, was that the “trout would win because they typically are more aggressive and territorial.”

The Gore Giant Trout Statue wins, convincingly. He would fuck up the Rakaia Salmon and cement his title as the best giant fish in the New Zealand. Although, all things considered, both are better fighters than the Ohakune Carrot.