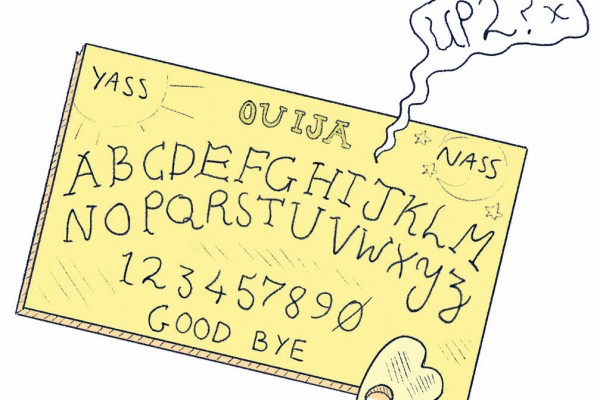 How to Tell if Your Flat is Haunted

Ah, Dunedin houses. Since most of the houses in Studentville are a little (a lot) old, the usual quirks of ancient houses are common, slanted floors, water stains, and of course, ghosts. Not all ghosts are mean and dramatic, some are merely vibing on the astral plane and sometimes stir up some funky business. I have yet to experience the presence of the Breather Ghost (which must exist), but I truly love the idea of a ghost that does nothing but steals your VBs and plays haunting DnB in the middle of the night. Although, that may just be your really pale flatmate.

Not all flats are blessed enough to inhabit such supernatural creatures. A little spooky activity in this dreary weather seems fitting, so why not find out if you’re one of the lucky few? If you don’t feel like dropping three dollars on some candles from Spotlight and hosting a budget seance, here are a few ways to tell if your flat is haunted.

These are a little harder to pick up on in Dunners because your flat is fucking freezing, but a big-time hallmark sign of a ghost presence is a cold spot. A cold spot, or a random temperature drop for no apparent reason. Although the reason for cold spots is debated, many think it is where a spirit is present, which changes the atmospheric pressure, resulting in a detectable temperature change.

If the rest of the room is one temperature (cold), but you walk through a space that is fucking freezing and makes the hair on the back of your neck stand up, you may have a ghost. Or a broken heat pump, either way, check with your landlord.

One of the bigger, more Paranormal-Activity-stereotypical kind of event, is the movement or disappearance of objects by an otherworldly being. Doors and cupboards being opened or closed without any clear reason, objects you swore you left somewhere and turn up on the other side of the house, keys missing when you actually put them away this time, all may be the work of a spooky housemate.

In my second year flat, our $15 plastic bong went missing for over a month, before turning up in a very visible place (behind the water heater), where I would literally swear to you we looked a hundred times. Our spirit apparently was a buzzkill, which kinda sucks, but it was definitely a little weird. Either that or Proctor Dave Scott is up to his usual tricks.

If you’ve been smelling something funky (that isn’t the bottom of your fridge or the puke staining the floor), it may be a ghost. The smell of rotten eggs or sulphur is often associated with a supernatural presence. That being said, definitely clean your flat before using this as an excuse for you being a messy bitch.

This is often in accordance with other signs and shouldn’t be taken as its own. If you’re smelling weird gaseous shit in your house, without any other of the fun ghosty signs, definitely talk to your landlord. That shit might be a gas leak, then you’ll be the breather ghost haunting that scummy abode.

Light some scented candles, open the windows and clear out the house. It may help with the smell and disperse some of the residual creepiness. Apart from if your ghost is kinda cute, don’t disperse that shit.

Is your wifi going out more than usual? Weird issues with normal pictures of the flatties being taken? May have some ghosts fucking with your tech. If you’ve ever watched a ghost hunting show, you may have seen something that looks like a supermarket scanner. That’s an EMF machine, and it reads electromagnetic field, which supernatural entities fuck with.

Inexplicable tech problems, especially if they’re not happening anywhere but your house, may mean a ghost is trying to fuck with your GPA, which is kind of a dick move. So, what do you do about it?

How to Deal with a Ghost in your House

There are a couple of options in terms of dealing with a ghost flatmate that is definitely not paying rent. With most minor hauntings, you should be going around, introducing yourself to your spooky freeloader, letting them know that you’re living there and they’re gonna have to learn to share or hit the cosmic road.

If a ghost is causing problems or freaking you out, my go-to solution is being kind of a pain in the ass. I walk around my house, banging pots and pans and yelling about how this is my house, I’m on the lease agreement and I would not like to be bothered anymore. Usually, problems cease for a wee while after that.

If you’ve experienced any of the following, you should probably contact a priest: possession, spiritual violence, ectoplasm secretions, the discovery of dead animals in random locations, persistent occurrences of the listed events, or any extreme spooky activity.

Although exorcists are unlikely to advertise their services, it’s a safe bet to walk into your local Catholic church and have a heart to heart with a priest. They may try to indoctrinate you, but you can eat some wafers and have a glass of vino in exchange for getting some dick from the afterlife out of your house.

Overall, if you’ve watched the movie Sixth Sense, then you know that a ghost is probably just trying to tell you something, to gain a sense of closure. Listen to them. Maybe throwing open the cupboard doors is a sign that you should paint your kitchen cabinetry. Maybe turning off the wifi is a signal that you should get off your phone and talk to your friends. Maybe, you’re being haunted by Patrick Swayze and you should get your ass a pottery wheel.